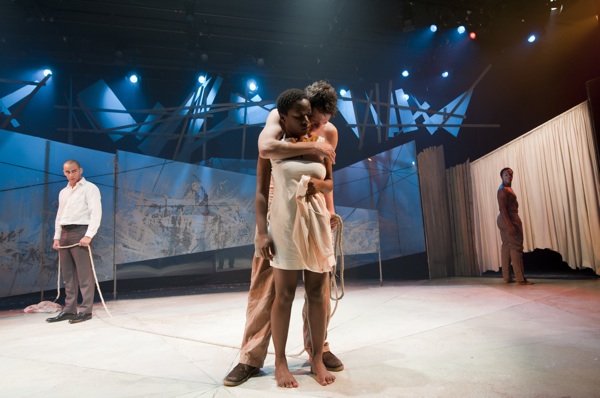 Grant Swanby as The Magistrate and Chuma Sopotela as a barbarian girl. Photo by Andrée Lanthier.

How many ways can one human torture another? Let me count. Rape, blindings, hobblings, threatened sodomy, forced cross dressing, deprivation of food and water, beatings and whippings, breaking bones, being forced to torture others, being forced to exercise on broken limbs, interrogation, sleep deprivation, false executions, threats of executions, public humiliation and stringing wire through the skin to create an attached row of people who are made to stand and squat.

Disgusting. These are just a few of the ways that torture is described, implied or acted out in Alexandre Marine’s adaption of Waiting for the Barbarians, based on J.M Coetzee’s cerebral novel. The play is a gratuitous and brutal look at man’s inhumanity to man and the difficulty posed when standing up for justice in the face of a hysterical, militaristic regime. While the themes are monumental and there are some clever directorial decisions, symbolic characters in an unsubtle story render this production more painful than illuminating.

The play traces the fall and redemption of an unnamed Magistrate (Grant Swanby), whose post in an insignificant frontier town at the edge of “the Empire” allows him the freedom to spend his time indulging in whoring and building his hobby collection of archaeological materials. The Third Bureau (a military unit) arrives following rumors of an upcoming barbarian war and begins torturing local “barbarians” under the Magistrate’s watch. When the Magistrate nurses and returns a barbarian girl (Chuma Sopotela) to her family out of guilt and love, he is declared a traitor and tortured.

Unnamed characters and setting allow the story to find universal application. This ambiguity becomes a statement; all societies create and maltreat their “barbarians” — less-than-human outsiders who are reconstructed as threats to all that is civilized. The original book as well as this production seem to reference Africa, especially South Africa in the days of apartheid. All the same, different casting, costumes and sets could tweak the production for both real and imagined situations.

Unfortunately, these symbolic characters don’t work well on stage. The Magistrate comes off as perverse. His fishy-cold lust for young women — whether sexy prostitute or maligned barbarian — is creepy, not sympathetic. His love for the barbarian girl has a white-male-liberal-guilt feel to it, rooted in both so-called civilized people’s unjustifiable treatment of her as well as her exoticism. His scene-linking soliloquies — some of which come straight from the novel — are irritatingly absurdist and do little to flesh him out.

Similarly, the women who orbit him, Zoe the local prostitute and the barbarian girl, are flat caricatures. Their personalities are viewed through the Magistrate’s eyes and he sees them as objects that meet his needs. The members of the Third Bureau are even worse  — mere emblems of cruelty, bloodthirst and injustice. The idea that the mistreatment of others reveals the barbarian in ourselves is just a cliché.

That said, the production is physical and muscular. Everything on stage is in constant motion, not with a light step but with determination. Some of the stagings are brilliantly conceived. For example, we see the Magistrate hiding under a bed from the perspective of the floor while Zoe has sex with a soldier above him. In another, an early dream sequence makes use of a giant white sheet to emulate snow.

Ultimately, though, the book’s poetry and cerebral approach to universal themes don’t translate well to the stage. The repetitive references to violent torture, the symbolic characters and an unsophisticated embrace of clichéd ideas render this production voyeuristic and uncomfortable to watch.