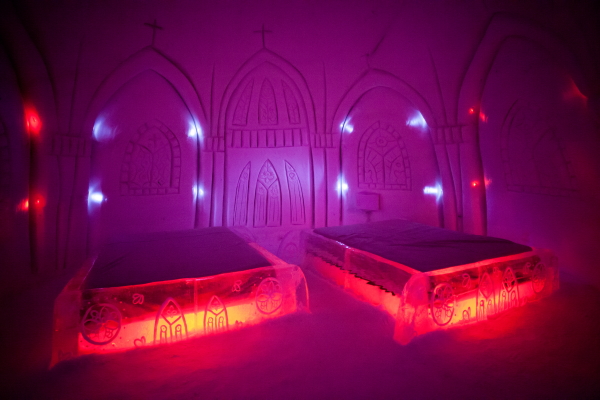 A couple of surprisingly cozy beds at the Ice Hotel, in Parc Jean-Drapeau, photo by Susan Moss

Just after midnight on a Friday, a 20-something girl stood behind the bar at the Ice Hotel. The most inoffensive dance music imaginable blared from the DJ booth she was facing. “Backstreet Boys! Come on!” she screamed. And with that, “Step by Step,” a New Kids on the Block song, came on.

While only a short metro ride from the city, the Snow Village, the site of the Ice Hotel, seems removed from civilization. Or at least that’s how I felt a couple of weeks ago, when I spent a night there in the name of hyperlocal journalism.

The cold was relentless. At one point, I asked my travel companion why InterContinental, the company behind the whole thing, couldn’t just heat the fucking place. The question was stupid, but it was tough not to consider, given the wiring snaking through the structures, powering lights, sound systems and so forth.

But heat is, of course, the enemy of all things ice, the hotel, the design of which is kind of awesome, included. A week or so before, when temperatures climbed to the teens, the ornate tables chairs in the restaurant, all made of ice, began to melt. The structures themselves, however, were safe — they’re built using plastic molds and many layers of snow, so they won’t give way to warmer air when spring arrives. Instead, they’ll have to be demolished, as though the city had expropriated them and planned to use the space for something more practical.

I amused myself with ideas of icy gentrification and urban renewal throughout the night, probably because my companion said Quebec’s Snow Village is more “built up” after she met a family from Cambridge, ON that had driven to our province’s capital, thinking they had booked a room there. On realizing their mistake, they drove to Montreal, where they spent the night.

We sat at a table near theirs at breakfast the next morning. No one in the room looked rested, though some were surely staying to go snowshoeing or ice skating or whatever — activities that, if you were an outdoor sort, would be a lot of fun. A staff member offered the disgruntled Ontarians some kind of membership to the village, but they weren’t into it. They had a seven-hour drive home, they said, and they had to leave.

If we’d been on vacation, we’d have probably tried to make a day of it, but we couldn’t contend with the cold much longer. ■