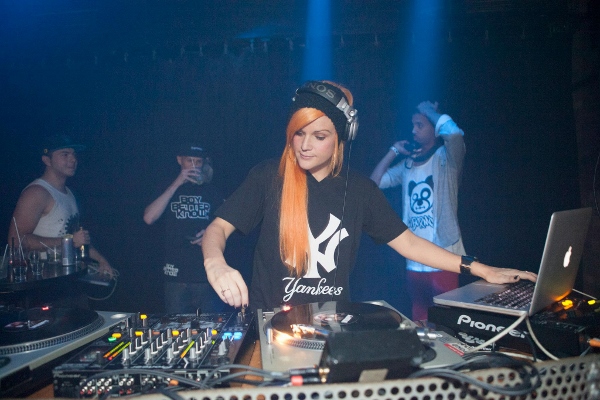 The flagship weekly of the reimagined Belmont nightclub fetes four years of bass supremacy tonight. Ahead of the party, resident DJ and birthday girl VILIFY (aka Jenny Carmichael) answered a few questions about the night and the rise of dubstep.

Lorraine Carpenter: Did you envision the success and longevity of this night when you launched in 2009?
VILIFY: I had never wanted to be a promoter. I got offered a chance to throw a night at a bar and I gave it a shot, not expecting that anything long-term would come from it, and here we are, four years later.

LC: What do you remember about the first edition? What was your first track?
V: I have no idea what the first track I played was — I wish my memory could retain that far back. The first ever Bass Drive had a bigger turnout than I expected. Having only lived in the city a few months, I was nervous about how the night would go. I believe the line-up was myself, Locomotive, Wally and Recoil and it ended up being a blast.

LC: How have the shifts in bass-music trends affected the night?
V: The rise of dubstep clearly helped Bass Drive become what it is today. Never has any genre of electronic music spread so quickly. For me, as a DJ and a listener, my taste is always evolving and changing. In these four years, I’ve seen dubstep crowds become more accepting of drum & bass, I’ve seen crowds react to breakcore in the middle of a set, I’ve exposed the crowd to genres they’ve never heard of. I’ve always played multiple genres, so I think people have come to expect that from a VILIFY set.

LC: What keeps it fun four years later?
V: This night has never once felt like work. There are a ton of reasons why it’s still fun. The new and the returning faces every week, the vibe and energy from the dancefloor crew, the plethora of music coming out, the ability to play dubstep, drum & bass, jungle, reggae, hip hop, metal, blues, you name it and have the crowd still going strong. Rocking out with the talented and inspiring DJ Henward. The AMAZING staff of le Belmont, (Brooke, Alessandro, every single bartender and bouncer). The crew there is incredible. I feel like I could go on forever.

LC: What do you like about working a mid-week club night?
V: The only drawback is that my weekends always start on Wednesday.
I feel like Wednesday is the first night of the week where people start itching to go out. It’s a perfect breather to escape from work life and make the week bearable.
I love having the night on Wednesday… I wouldn’t want it any other way.

LC: What’s in store for this week’s edition? Are you already thinking ahead to next year’s milestone?
V: We’ll be celebrating the four-year anniversary of Bass Drive — and my birthday — alongside SJU with KOAN Sound, Henward, Daddy Maysr and myself. It’s going to be absolutely epic. Of course this anniversary has got me thinking about next year already, but no hints yet. ■