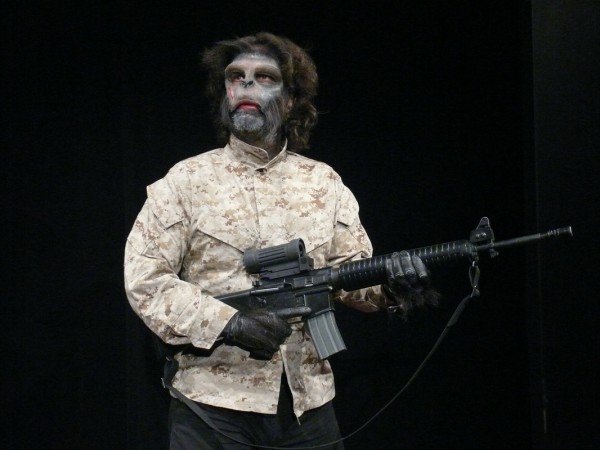 Before there was Animal Farm, Great Apes or Planet of the Apes, there was Franz Kafka’s “A Report to an Academy” — animal symbolism deployed to convey a message about human injustice and subtle cruelty.

Kafka’s Ape is a new production based on the Czech author’s lesser-known short story, adapted for the stage by Infinitheatre’s artistic director Guy Sprung. The tale features Redpeter, an ape captured out of the West African jungle who learns to speak and act like a human over the course of his confinement. He winds up in the employ of his captors, first working as a mercenary, then as a combat instructor. The entirety of the play is his report to a corporate shareholders’ meeting.

Redpeter recounts his decision to ape (as it were) his human captors, learning to speak and move like them — but never, he assures us, to think like them (although he was trained to savour the aprés-gout of a well-cellared wine). He allows himself to appear assimilated because he recognizes that there’s no escape from his condition, but he also knows that this is not true freedom.

The titular ape is played by hirsute lead actor Howard Rosenstein, who worked with movement coaches and watched, in his own words, “a lot of documentaries” for the part, to great effect. From details like his hunched back and the way he twines his feet around stool legs, to more showy simian scrabblings onto and off of the elevated stage and one virtuoso leap upward to swing from the set’s ceiling decorations, Rosenstein owns this role. His wife is exquisitely played by Alexandra Montagnese, who, in spite of having no lines, adds considerable diversion and humour to the show with her hammy lolling, climbing and hoots, dressed up in diamonds and lemon chiffon but 100% monkey.

Kudos are also due to movement coach Anana Rydvald, makeup tech Vladimir Cara and set designer Ariane G de Miomandre — the first two for enabling the audience to suspend belief about the man-turned-ape-turned-man, the latter for the piece’s minimal yet effective setting, which evokes the hotel conference rooms where these sorts of events go down, far from public eyes.

That said, it is an hour-long monologue (my +1 spent a good part of the show drifting into mini-naps, but there was also wine involved). The report is punctuated only by short projected film clips and the ape antics by Redpeter and his wife, although both get in a few solid laughs. Overall, this is not a show for those with even trace symptoms of ADD.

However, those with patience will be rewarded. The piece retains the playwright’s original themes of minority alienation and social exclusion — Kafka himself was a German-speaking Jew living in anti-Semitic turn-of-the-century Czechoslovakia, a corner of the sprawling Austro-Hungarian empire soon to be overrun by Nazis (“a minority within a minority within a minority,” as Rosenstein put it in a pre-show interview). And with his non-stop roll of drinking jokes, ape puns and simian tics and twitches, Rosenstein is a compelling centrepiece for the show.

The play also adds a second, more contemporary polemic by substituting the shareholders of the Graywater Corporation (a thinly veiled allusion to the private military titans formerly known as Blackwater, now Academi) for Kafka’s Academy as Redpeter’s audience. This adds a strident critique of global capitalized militarism to the play’s now-dated allusions to imperial colonialism.

The script is also peppered with references to contemporary pop culture and tech gadgets. There was a running gag about Redpeter’s troubles with the projection remote (apes have opposable thumbs, but ours are better), where his slick PowerPoint would suddenly flip to a Sirius station or football game. At the same time, it retains a lot of Kafka’s early 20th-century linguistic formality, so that Redpeter’s delivery occasionally jarred with the here-and-now. Like many a lit-classic update, the laudable goal of staying loyal to the original hampers its modernization.

All in all, though, if you can sit still and pay attention for an hour, The Ape is a moral lesson in a charming package from one of the hardest-working troupes in town. ■