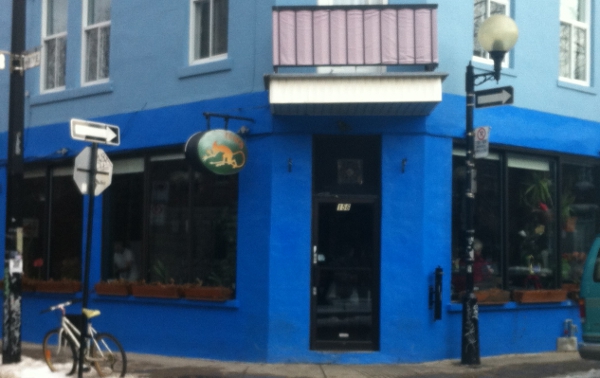 The Plateau mainstay that is Else’s

Else’s is an institution for many Montrealers. On the corner of Roy and de Bullion in the Plateau, this cozy, welcoming little spot has not changed much over the years — so much so that there’s still a collection of cassette tapes over the cash and an eclectic mix of knick-knackery that newer restaurants and bars attempt to recreate ironically. But At Else’s, it’s the real deal: that shit has been there for almost 20 years.

Else’s has always been a bar with a restaurant license, which is a bonus if you’re hungry and a real pain if you’re not. Luckily, two guys took over the kitchen last October hoping to make it not only a great spot for a pint, but a place where you’d be happy to grab a bite.

Chef Christopher Lacy first approached the spot’s  management with the idea of ramping up the kitchen while still working within the budget, keeping everything at $11 and under and making really good food. He immediately called his friend and former co-worker Shawn Glassgow to be his sous-chef, and just like that, Else’s kitchen was fully staffed.

Lacy and Glassgow, whose CVs include restaurants like 737, Garde Manger, le Paris Beurre, Kitchenette and Ice House,  met many years ago, when they both lived in NDG, and have been working on and off with each other since.

“What we’re trying to do at Else’s is kind of like pub comfort food,” explains Glassgow. “It’s hard to define, and we’re still weaning out menu items, but we have a lot in mind for what’s coming up. We decided to start slow, and now that we have some of the food down, we can move from there.”

Though the menu looks pretty straightforward on paper, with items like spicy garlic shrimp ($8), shepherd’s pie ($9), confit hot chicken sandwich ($11) and beef carpaccio ($6), the dishes are way more complex and impressive than expected once they arrive at the table. And the ribs ($11) are killer — adapted from Lacy’s mom’s recipe and served on top of a solid layer of fries, their fall-off-the-bone tenderness is the ultimate argument for slow cooking.

“It looks basic, but it’s not,” Glassgow says. “Like the chicken sandwich — that’s confit chicken, and that takes time. Plus it’s just two guys doing all this. Although we have an extra set of hands for late night service, it’s crazy. We really put a lot of thought into everything.” ■