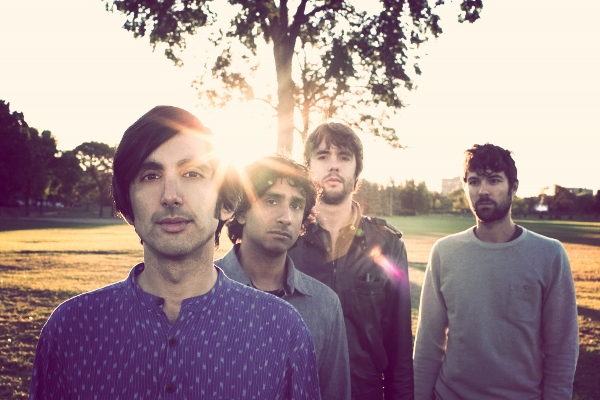 Five years after establishing Elephant Stone solo, Rishi Dhir has molded the project into a sonically robust and conceptually sound force, employing elements both tangible and intangible. The band’s new, eponymous album features the Britpop derivatives, psychedelic rock sounds and Eastern elements that were present on their 2008 debut record Seven Seas, as well the the 2010 Glass Box EP, but the arrangement and execution of their songs is bolder and more assured.

Dhir, who was a member of the High Dials prior to launching Elephant Stone, is also the touring sitarist for Austin psych-rock band the Black Angels, a job that’s seen him log many kilometres (or miles), including a recent festival gig in Australia where he wound up playing with Beck.

This year will see widespread Elephant Stone touring, including shows in Ontario and Texas with ’60s psych-pop legends the Zombies, though that’s not a first for Dhir: the Datsons (the High Dials’ original moniker) opened for the Zombies in NYC over a decade ago.

Last Friday, an hour before he had to leave to play a show in Sherbrooke, I spoke to Dhir in the home office where he demos his songs and writes his lyrics, with his wife and one of his two toddlers in the next room. We talked about how guitars, criticism, the psych surge and the Black Angels vibe informed Elephant Stone.

Lorraine Carpenter: As far as the songwriting, is it still the Rishi show?
Rishi Dhir: I started doing this as a solo project ’cause I didn’t want to be in a band again, but ever since Gab [Lambert] joined — he’s been in the band since 2010. He’s the guitar player, right? I play bass, sitar and sing, so our roles are very defined, and a guitar player is such an important role in rock ‘n’ roll. Look at the Smiths and all those bands; the guitar-playing is so important. He really makes it what it is.

But yeah, it’s my songs and my vision of what it should be. I remember on “Silent Moment,” in the middle part of my demo, I overdubbed some guitar and tabla and that was it. I told the band, “I’m gonna get a classical Indian singer for this part,” and they were like, “Oh really?” They didn’t really understand it until we were in the studio with the guy, and he did it in one take.

LC: How did you find him?
RD: My tabla player Shawn Mativetsky, I just went to him — he’s the Montreal guy for Indian music, white guy, amazing tabla player. I actually wanted a female singer but the key was more suited to a male voice, so he recommended this guy in Ottawa, who’s also amazing. I wrote to him very respectfully — he’s like 60 years old. I wrote, “Hi uncle…”

LC: So how has your vision for the band changed?
RD: We recorded Seven Seas in 2008 — so much has happened since then. Playing with the Black Angels changed things a lot. And so much good music has come out. It’s really inspiring how much the psychedelic music scene has grown.

Also, I’m one of those guys who reads every review and goes, “Why did they say that?” A lot of people who listened to Seven Seas wrote, “Oh it’s just a pop album,” “Oh it’s got these really long, boring sitar jams,” and then they’ll be like, “I don’t understand this band.”

For this record, I wanted to present something that they couldn’t just pigeonhole, but at the same time had a very clear identity. If you listen to this album, you know it’s Elephant Stone. There’s this vibe throughout the record; it touches upon so much. That’s why it’s self-titled. I didn’t want to lead anyone with this other idea. I just wanted to focus on what the band is. I really feel at this point I know exactly what Elephant Stone is.

When I started, I wanted four guitar players, I wanted to hide behind all this noise, and through the years we just weeded down from four to one guitar player, and now we have a dedicated keyboard in the band. It’s a much more clear vision of what the sound was meant to be.

LC: How would you say the live show has changed?
RD: I know when we play, we definitely stand out — we’re not like every other band anymore. Touring with the Black Angels, I saw how it can be, how easy it is to just make it so awesome and make it an experience. You have to create a vibe.

It’s kind of like putting a record together. You can make a record conceptual without there actually being a theme; it could be a sonic thing, or it could be just this feeling. Putting a show together is similar: the peaks and valleys, how you want to bring the audience with you, how you want them to connect with you at certain points.

Tonight’s the first show since the record’s out, so I’m really excited. ■