Nicole J. Georges’ comics and zines have been a staple of the independent publishing world for more than a decade. Her endearing mini-comic Invincible Summer covered the trials and tribulations of late-adolescent life in the scrappy Portland art scene with an inimitable style. Her latest work is an excellent oversized graphic novel, and she has masterfully adapted her witty narration and superb illustrations to this longer format. Calling Dr. Laura is a startlingly honest memoir of lost love, family secrets and living with far too many dogs.

We are drawn into the book’s central mystery when a friend gives Georges an appointment with a palm reader as a present for her 23rd birthday. In addition to informing her that she would marry a wealthy man, the medium tells her that her father, whom she grew up thinking was dead, is in fact “very much alive.” Georges realizes that this might very well be the case, as she has many unresolved questions about the events of her early childhood.

This becomes the basis for a series of childhood recollections, equal parts endearing and unsettling. Woven throughout the memoir, they reveal a chaotic home life and the ill effects this had on Georges’ health. These flashback episodes are presented in a simple black and white line style that contrasts nicely with the more complex illustrations and muted grey washes used in depicting her contemporary life, a palette that perfectly evokes both the rainy atmosphere of Portland and the uncertainties of adulthood. 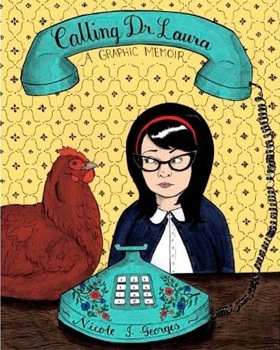 The slow process of deciding to seek out more information about her father is narrated as it is lived, as one part of Georges’s Portlandish life at the time. She also adopts a stray chicken, works as a karaoke jockey at a bar, goes on a zine tour, starts a new romance and a new band, all of which are lovingly detailed and serve as a snapshot of DIY Portland in the 2000s. Eventually she makes the eponymous phone call to Dr. Laura.

With encouragement from her girlfriend, Georges finally questions her older sister, who tearfully admits that the fortune teller was right and that her biological father was indeed still alive. A less confidant writer would have built this up as a major revelation, but while she was happy to discover the truth, Georges admits that it did not radically alter her life. The next step becomes how to broach the topic with her complicated mother, in addition to worrying about coming out to her. As Georges contemplates going home for Christmas, her girlfriend Radar tells her “The only way I’d support you going home is if you say ‘I’m gay, who’s my dad?’”

As the book comes to a close some of these issues are resolved, while others remain in process. In this regard Calling Dr. Laura is truer to the vagaries of real life than many memoirs that are eager to over-dramatize, even sensationalize true events, and then wrap them up with a bow at the end. Although Georges discovers some new truths and makes peace with her mother, the book nonetheless ends on a sad note, one that reminds us that life is short and that life’s big issues can easily go unresolved, lost in the struggle to survive from day to day.

This memoir isn’t a pity party; it is borne out of an honest desire to process and share this strange sequence of events that occurred when the author least expected them. Calling Dr. Laura is an engrossing read from a fantastic cartoonist. ■

Jeff Miller is the author of the award-winning short story collection Ghost Pine: All Stories True. He lives and eats pasta in Little Italy.