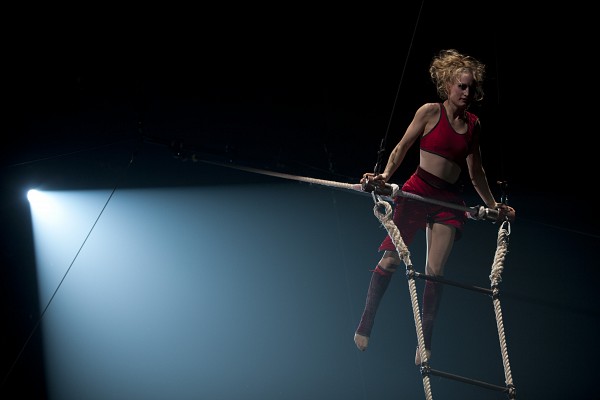 Every two years, TOHU hosts a talent show on steroids, when past winners of the international Cirque mondial de demain festival roll into town. This third visit by the laureates features 16 performers from eight countries. The show is great for circus neophytes or those with short attention spans; watching it is like a live version of clicking through a series of hit YouTube videos. Audiences can see amazing short acts uncluttered by any overarching theme, storyline or stage set.

Over 400 circus artists under 25 years old apply to perform at the Cirque de demain festival in Paris each year. More Olympics than art festival, its performers present acts as representatives of their native countries. The 34th edition just wrapped up last month. This year’s jury was headed by Jeannot Painchaud, artistic director of Montreal-based Cirque Éloize; several of the winners are from or studied in Quebec.

That, and Montreal’s overall self-branding as a world circus capital over the last decade, prompted Cirque de demain to bring these special edition shows to Montreal, and Montreal alone.

This year, winners from the 2013 competition share the stage with some past winners, including the Gold Winner from 1984. That’s right, 1984. That winner is Nathalie Enterline, a baton twirler — although that’s a bit of a misnomer, as what she presents is more of a showdance number. She moves through a flashy costume change from a Charlie Chaplin impersonation to a feel-good Frank Sinatra segment. A classic performer through and through, Enterline is of that breed of performers who’ve clearly been impeccably trained to display perfect technique and exude a persona every second they’re onstage.

It’s a far cry from the hand-to-hand act by Germany’s Chris & Iris, which involves nothing but the performers and a mic. They sandwich matter-of-fact tricks between simple small talk with the audience. Or, for that matter, from the two contortionists from Tanzania, Robert and Abillahi, who cavort frog-like on stage in green velour, African keyboard percussion looping in the background — before one of them squeezes through a hollowed-out tennis racket.

There is also Le Boustrophedon, a trio made up of a pianist, flutist, and… a ballet pointe shoe-wearing performer dressed as a marionnette. She balances tippy-toe on ever-shrinking sizes of crystal glasses.

Then contrast that with Starbugs. They’re also a trio, but of hip hop dancing clowns who do silly choreographed bits to pop songs. This is, in turn, worlds away from Morgan, the hilarious juggler in toe socks who shines when he does his own sound effects and works the dropping of his balls right into the act, or Lisa Rinne, a daredevil trapeze artist who exhilarates with her multiple “if she wasn’t in a harness she would’ve fallen to her death” slips, or Ba Jiangou, a former street artist from China who wielded a top like a diabolo, accompanied by a pipa player in traditional dress.

Then there was Bert & Fred, a crowd favourite who weren’t overwhelmingly impressive at their listed skill, Washington trapeze (a performer head balances on this apparatus), but thoroughly titillated audiences with their little sadomasochistic acts that popped up throughout the evening. (The first: Fred — a woman — suspends a knife 30 feet up before ordering its release. It lands inches from Bert’s crotch.)

That’s the real attraction of such a variety show, in the end. You get a nice tasting plate of wildly different acts.

And, with a seemingly endless stream of nouveau circus shows coming out of the city that aim — often successfully, but not always—to inject theatricality and a contemporary art feel to circus shows, it is a pleasant palate cleanser to see a “best of” show with no pretentions of being a unified stage creation. You’re assured solid talent without any other distractions. ■