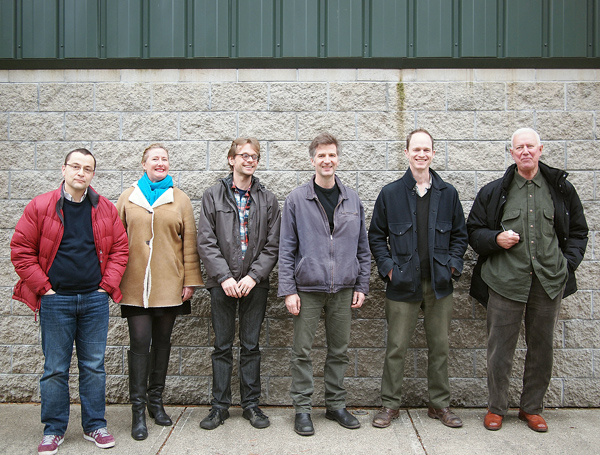 Jorrit Dijkstra (third from left) and the Whammies

The first thing that strikes you about Jorrit Dijkstra is his versatility. He plays alto saxophone, whistles, the Lyricon and other electronics, and his projects include everything from cerebral solo saxophone concerts to spacey electro-acoustics in a duo with percussionist John Hollenbeck. He has composed for free jazz ensembles, solo electric guitar, world music troupes and theatre groups, mixing the cool school of jazz with indie rock and minimalism.

Having spent the early years of his career in Amsterdam’s jazz community — well known for both high-level playing and wacky antics — he moved to Boston in 2002. Last seen in Montreal in December 2008 with the FlatIands Collective, a group of Chicago free improvisers, he returns leading the Whammies, a sextet focused on the compositions of the late soprano sax specialist Steve Lacy. Dijkstra studied with Lacy, who also had wide scope, delving into the standard jazz repertoire with the works of Thelonious Monk, as well as free improvisation and experimental composition.

The Whammies are a modern-day jazz supergroup, from the drum kit on out. Veteran troublemaker Han Bennink played with Lacy in the ’70s and ’80s, and is infamous for keeping time using not just his traps, but also the floor, mic stands and anything else in the room that can be struck. In a previous Montreal visit, he performed a captivating solo by waving a drum stick inside a plastic bag.

The ensemble also includes trombonist Jeb Bishop of Vandermark Five fame, Pandelis Karayorgis on the piano, the ICP Orchestra’s Mary Oliver on violin and viola and the warm and inventive bass playing of Nate McBride. With Oliver and Bennink from Amsterdam, Dijkstra and Karayorgis from Boston and the others from Chicago, the band does not get together often. This second North American tour will be followed by dates in Europe.

The Whammies recently released their first CD, simply titled Plays the Music of Steve Lacy. It was released by Dijkstra and Karayorgis’s own Driff Records label, and includes seven Lacy covers and one Monk tune, “Locomotive.” Bennink, who is also a visual artist, created the cover art.

I reached Dijkstra by phone, and we talked about the band, what he learned from Lacy and the upcoming tour.

Lawrence Joseph: The group spans not only three cities and two continents, but also several generations of musicians. How did the Whammies get together?
Jorrit Dijkstra: I had already played a lot with Chicago musicians like Jeb Bishop, and knew Nate McBride from when he was living in Boston. I’ve known Han Bennink for a long time — his music was something I grew up with in the ’80s and ’90s. I had been playing Lacy tunes for the past 10 years, and decided to organize a concert. The organizational effort was a joint one with Pandelis, who’s also in Boston.

LJ: You were Lacy’s student, and have mentioned his book Findings as being especially influential. Aside from Lacy’s message that you can “make music out of anything,” is there something that was especially instructive from the book or the lessons?
JD: What I liked so much about Lacy’s music is that he takes elements from the world around him and puts it into music. Like ducks at a pond, or a rainstorm. It’s a very simple thing, and it can be cheesy or it can be interesting, but Lacy always did it right.

Lacy was also interested in language and poetry.  He taught me to take a word like “hello” and try to phrase it using intervals so that your instrument sounds like “hello.” It’s a different way to practice, and it exposes a whole world of musical possibilities, away from scales and chords.  It opens up your mind.

LJ: Did you have access to the scores for Lacy’s compositions?
JD: I did have access to the notation. He passed out some scores to his students, and other works had been floating around. I also met with his widow, Irene Abei. I went to her house, and she gave me a bunch of scores, which was very nice of her.

LJ: You’re one of the few to play the Lyricon, and on the Whammies album you’ve used it to create high-register sounds that are similar to those Lacy played on soprano sax. You also play soprano, yet do not do so on this record. Why avoid the soprano sax on a Lacy recording?
JD: I’ve been playing the Lyricon for 12 years now, and it’s a fantastic analog synthesizer from the ’70s, nothing to do with MIDI. You have incredible control over the synthesizer, and can make it sound like a wind instrument. It’s a way to extend the horn into extreme top and bottom ends.  I did play soprano a while ago, but playing in a Lacy band and playing soprano is extremely dangerous — I don’t want people to think I’m just trying to sound like Lacy, I already need to watch out for that!  In any case, Lacy liked the low end of the soprano, and many of his pieces explored the low end. So they’re in a good range for the alto.

LJ: All of the Lacy tunes on the album are dedicated to other musicians, or in one case Mondrian, the Dutch painter. Are there any connections between the songs and the particular musicians to whom they’re dedicated?
JD: Every single Lacy composition has several layers of meaning attached to it. They’re more than just melodies and intervals. Almost every tune he wrote was dedicated to a particular artist, which is one layer. I’d been looking for Dutch connections, and we’ll be playing more Dutch dedications during this tour, things he wrote while residing in Holland.

The title “Dutch Masters” is from a cigar box painting by Larry Rivers, who was a Beat Generation guy. It was at the Chelsea Hotel where Han was staying in the ’80s. So Lacy dedicated that tune to Spike Jones and the City Slickers, who played slapstick movie music with crazy special effects, which was maybe referring to Han’s antics. Han drummed with Lacy in the ’70s and ’80s, and Han loved playing “Ducks,” so I decided to play that one, too.

LJ: The recording mixes Lacy tunes with improvisations based on them. Will the live show in Montreal follow a similar strategy, or will there be surprises?
JD: The show will be much looser than the album. One of the things I like about playing with these great musicians is that anything can happen. So we might not even make a setlist and just pull things out as they come along, take that kind of freedom. There will be lots of free improvising within and around the tunes. Hopefully every concert on the tour will be different. There will be Lacy tunes not on the album, including some that have hardly ever been performed.

LJ: Are there plans for another recording project for the Whammies?
JD: During the tour, we’ll be doing a second studio recording, again all Lacy tunes. We’ll also do some live recording and see what we come up with.

LJ: Is there anything else you would like to add?
JD: I hope people come out and don’t get stuck in the snow! ■