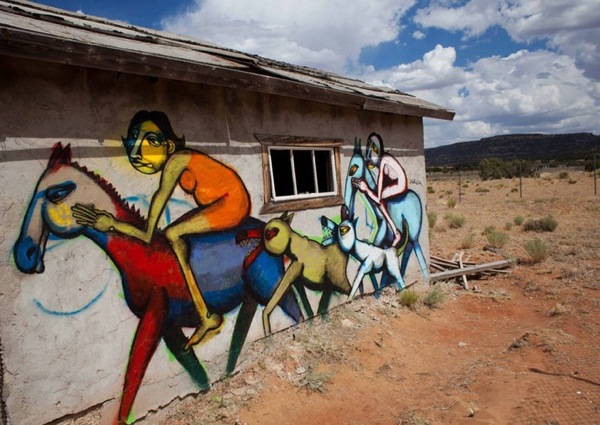 Two of Montreal’s most gifted, creative and prolific street artists, Labrona and Produkt, are collaborating on a live painting session as part of the Montréal Créative series of workshops and performances organized by Massivart and ARTV Studio.

I spoke to Labrona via email about live painting, the strength of the local street art scene and his plans to decorate the world, one massive mural at a time.

Emily Raine: How planned are your (public) live painting projects? Will you and Produkt consult as you work and draw around each other?
Labrona: I sketched out an idea the night before the event. It’s a huge beautiful canvas, so I want to use it well. I made some sketches and drew the best one on the canvas. I filled in the characters with spray paint raw, and at the event I will fill in the details. Produkt and I are not collaborating, but it will be great to see him.

ER: Does the live audience change the content or process of painting, or can you mostly just ignore them?
L: The audience doesn’t change the content of the painting at all, but it changes the way I paint. There is a bunch of people watching, so you want to make it interesting — you can’t spend an hour figuring out a line or shadow. I guess it makes me paint faster so people have something good to look at. I try to ignore what’s going on in the room around me and get into the painting zone and hope it turns out.

ER:What do you think about the state of the Montreal street art/graffiti/underground art scene right now?
L: The scene is great, lots of good people making stuff happen. I’ve been around for a long time, so I miss the days when I first got into painting outside, in the late ’90s and early 2000s, when it was all new and fresh for me. We had such an amazing scene with so many great artists and friends that have stopped painting and moved on to other things. But then everyone has their era that makes them nostalgic.

ER: What’s the most important idea or theme that you try to bring to your work?
L: I’m not sure what my most important theme is. I come back to a lot of similar things, but a lot of it is from deep inside my subconsicous, so I’m hesitant to say what it all means. It changes from day to day. All sorts of human interactions and emotions, power structures, past cultures, spirtual stuff, strange rituals, the rat race, greed, love, family, envy, suffering, jealousy, searching for some sort of meaning, peace, unity, war — all the stupid and wonderful stuff humans do.

ER: Your main character or portrait style is very distinctive. What do you think it is that draws you to this face-shape or constellation of shapes?
L: The constellation-type stuff were me trying to do something abstract and colourful, something pattern-like, but I didn’t want to let go of the figure, just interesting compositions and colours. I was inspired by Buddhist mandalas, things repeating themselves over and over, and also large crowds of people, like stars in the sky.

ER:Anything exciting in your pipeline for this year?
L: There are lots of little things planned here and there, nothing concrete. The year’s just started, but I’m positive it will be a good one.

This past fall, I painted a huge mural with the Montreal-based mural project MU. That really inspired me to paint large murals. I can think of nothing I would rather be doing than painting walls in cities around the world, so I will work on making that happen. ■