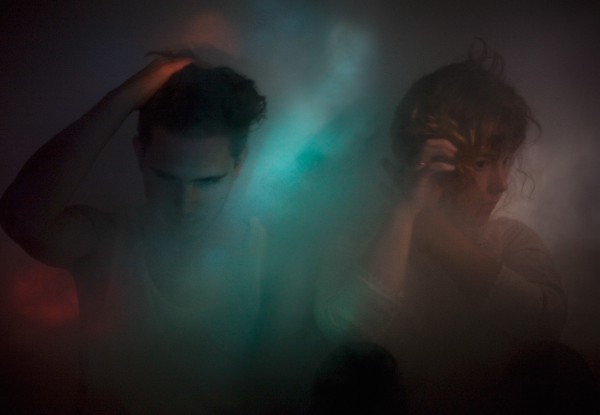 For many, the holidays represent an opportunity to reconnect with family and update them on all the major personal experiences from the past year. It may come as a surprise, then, that for Purity Ring’s dynamic electro-duo Corin Roddick and Megan James, Christmas in Alberta didn’t involve bragging about their big year — one that saw them release an acclaimed debut album, Shrines, and extensively tour the U.S. and Europe.

“Spending time with my family is a little bit weird now because everyone’s talking about what I’m doing,” says James, who resides in Halifax the rest of the year. “I’m constantly changing the subject. They’re just excited — it’s cute.”

Similarly, Roddick says he’s not one to reminisce. “I didn’t go home and reflect on what a great year it’s been. I was more interested in having a good time with my family.”

I caught up with the pair by phone from Roddick’s apartment/home studio in Montreal, where they were in the middle of tinkering with their live set, working on a cover they might premiere at this Thursday’s show and making repairs to Roddick’s sample-and-light-triggering instrument.

Erik Leijon: How much of Shrines was recorded in Montreal?
Megan James: Half and half, but none of it was recorded in a studio like the one Corin now has in Montreal. I guess you had a studio in Edmonton, but not Montreal.
Corin Roddick: Right. When we started the record, I was working out of a studio in Edmonton. The first few songs were done there, then a bunch of the record was done in various apartments and living rooms in Montreal, with minimal gear.

EL: Does the music you’re doing now sound different, then?
MJ: To the very close listener, maybe.
CR: If you listen really closely, it might sound a little bit bigger, maybe a bit thicker, or shinier — that’s what we’re looking for.

EL: What can you do now that you couldn’t before?
CR: Mostly it’s in terms of mixing. Before, when I mixed the album, I didn’t have a very good listening set-up, so when I was working to get the right levels of bass, for example, it was really tough to hear what was going on. Now I feel like I can really hear the full range of whatever song we’re working on.

EL: What are you working on now?
MJ: We’re writing right now, but we’re mostly recording for the live set, so we have a few new things to play. We need to change our set, because we’ve been doing the same one for the past year. We’re upgrading.
CR: We’re working on odds and ends right now. We haven’t really kicked into gear on the next record yet. We have little bits of instrumentals we’re looking forward to developing, but right now they’re just embryos.

EL: How will this upcoming live set be different from your headlining set at Pop Montreal?
MJ: We’ve changed a lot of the lights. We’ve been recording a cover, too.
CR: A lot of it involves rearranging the setlist, making everything flow stronger, changing a lot of little things to make it more interesting for us and to people who’ve seen it before. On some songs, we might extend a certain part or add a little something, and there are new transitions. This is the first time we’ll be touring with a lighting designer, so we’ll be able to make use of not only our lights but the venue’s.

EL: Did you know anything about lighting before you built your earlier setups?
MJ: Neither of us are formally trained electricians, but for the cocoons [the paper lamps used in previous shows] we had a lot of help from Tangible Interaction in Vancouver, so it wasn’t all us — it was too big a setup for that.
CR: The instrument we built ourselves though, so we had to learn quite a bit about electricity and lighting. That was a challenge.

EL: What will you be doing for the new Danny Brown album?
CR: We’re pretty much just producing a track for his record. I made a track and I think Megan may or may not do some vocals on it, depending on how things feel.

EL: Is it more of a traditional producer/rapper relationship where you sent him the beat and he liked it?
CR: I sent him the track, but I guess it’s going to be somewhat more collaborative because we’ll be sending it back and forth a few more times. Once we send it a few times and add parts, it’ll be more collaborative. It’s halfway done right now. I don’t know when his record’s coming out, hopefully not too soon because I want to have some more time to work on it.
MJ: I haven’t even heard it yet. Right before you called, Corin asked if I wanted to hear the track. I’m a bit surprised you knew about it already.

EL: Actually there’s an article that says you’re providing a hook.
MJ: Really?
CR: Yeah, I read that, too. He must really be anticipating it then. Either way, there will be another Purity Ring/Danny Brown collaboration [there’s already this one], and it will be hot. ■