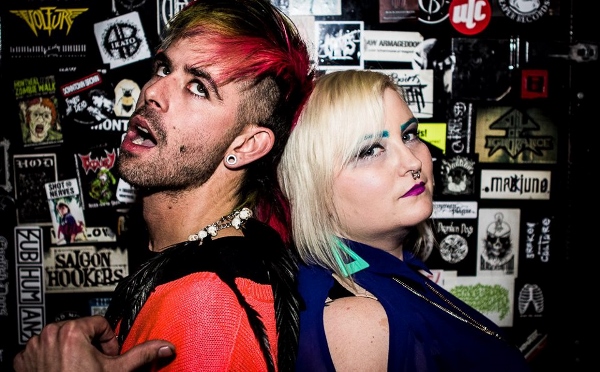 When DJ JNNBNNRCK and Laura Boo first met, within Montreal’s radical queer event-organizing milieu, they realized that they had a shared nostalgia for Overdose, a former Thursday night staple at Village nightclub Parking.

“That night has been over for almost a decade and people still talk about it,” says Boo.

“They weren’t as mainstream as the weekend events, and were always a source of more current, interesting electronic music,” adds JNNBNNRCK. “It became a dream of ours to revive those nights.”

Overdose was first hosted by DJ Frigid, then by DJ Mini, in the tradition of long-running Thursday alternative nights that took place in the smaller rooms at cavernous queer clubs Sky and Unity. These events, where DJs Bobzilla, Plastik Patrik and Frigid used to spin, were some of the first club nights that I ever went to, incidentally.

Precedents for POMPe can be found even further back in the history of Montreal’s queer club realm, when the Village was essentially a string of bars and clubs in the heart of downtown (back when downtown was a cool place to go out, for gays and straights alike). When this city’s nascent punk rock scene of the late ’70s needed a licenced place to stage shows, bands and promoters began booking the gay bars — the only establishments that were fringe enough to embrace the new sound.

Given that history, it’s fitting that one particular punk rock club is giving back to gay nightlife. Though the inaugural edition of POMPe took place at Jello Bar, and subsequently held court at the indie/rental venue Espace des Arts, Katacombes has been its home for nearly a year and a half.

“It’s such an amazing bar,” says Boo. “They’re wonderful, and a great crew of people. They’re just the right amount of sketchy, but solid enough to make sure the electricity doesn’t get cut off, so it’s cool!”

TAKING THE BS OUT OF CLUBBING
When Boo turned 19 (she’s now 32), she began driving all the way to Toronto for Will Munro’s weekly Vaseline night — that’s how disconnected she felt from Montreal’s queer club scene. Eventually, local radical queer groups like the Ass Pirates began hosting events in lofts and dive bars.

“They were bizarre, they were amazing. I’d go to gay bars and feel like a schlub, and then I’d go to these parties and see people who look like me and I’d be amazed that they were gay as well.

“Later, when a lot of events started to happen in clubs outside the Village, I found that they weren’t playing the kind of music I like to listen to. I love going out and dancing to all kinds of music, but I really love indie, punk and electro. POMPe mixes in all kinds of stuff, like lately we’ve been playing this new, rough kind of queer hip hop, like Mykki Blanco.”

Having developed their skills as organizers, hosts and DJs, Boo and JNNBNNRCK launched POMPe with the intention of providing a home for their peers with different musical tastes, in a free-spirited atmosphere that’s light on drama and bullshit, as Boo puts it.

“I have a kind of ‘be nice or go home’ policy,” she says. “Club scenes are not always nice, they’re not always welcoming; clubs are about being cool, about being skinny, about being beautiful, about being fuckable. What I love about going out dancing is that it gets you away from the pressure of all that, you know what I mean? Being on the dancefloor around people you finally feel at home with is the most amazing feeling, and that’s what I want from POMPe.” ■