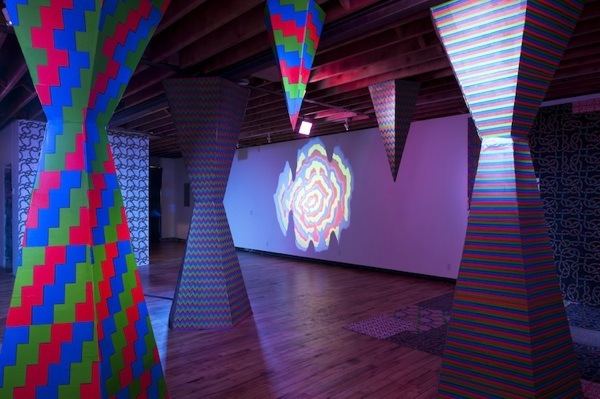 This week in arts is a sort of passe-partout, featuring a particular nod to Québécois culture — a photo exhibit that examines French as a second language, a beloved kids’ show for pretty much all citizens of la belle province and a whole range of local artists doing their thing.

Based right here in Montreal, Edward Maloney is a multidisciplinary artist whose work has been featured at virtually every popular Montreal festival — Pop Montreal, Nuit Blanche and Montreal en Lumière, to name just the big ones, and his work has adorned the walls of many a major Canadian gallery. This month, he presents Figments of Reality, work that expands on a video installation created for the World Event Young Artists in Nottingham, England. Vernissage Jan. 23, PFOAC 221 (Belgo Building, 372 Ste-Catherine, #221), 7:30 If you’ve grown up here, surely you’re familiar with the children’s program Passe-Partout, or at least the sight of a buck-toothed zebra should ring a bell. Anyways, Sandra Chevrier, Sophie Wilkins, Pascal Normand and Melany Fay, are among the 20 Québécois artists pining for the days of their youth through artwork inspired by the popular kids’ show. Some of the work on display will be for sale and Guillaume Soucy (and friends) perform. Jan. 23, Sala Rossa (4848 Saint Laurent), 7 p.m., $7-15, children under 12 free

Famed Franco-American experimental artist Babette Mangolte recounts, through audiovisual pieces, film and performance, the tale of her time spent in New York in the ’70s in an eponymous solo show at VOX. A recurring theme in Mangolte’s work is the understanding of the human anatomy; how the body moves in a particular space. Vernissage Jan. 24, VOX (2 Ste-Catherine E., #401), 5 p.m., free

For so many of us growing up in Montreal, the French language has been as important to our culture as our mother tongue. Melanie Lambrick’s French School/École française is a documentary photo exhibit looking at adults learning French as a second language — surely something all Montrealers might benefit from checking out. It is, after all, “notre home” (yep, said that). Vernissage Jan. 24, Visual Voice Gallery (Belgo Building, 372 Ste-Catherine W., #421), 5 p.m.

Head over to Centre Clark for two stirring events over one night: first, Les queues de comète, by Claudie Gagnon, uses everyday household objects to form what appear to be comet tails, or “satellites,” that are suspended from the ceiling to form systems that dangle into the space below. Then, head over to Gallery 2, where Karen Kraven’s As Above, So Below provokes the viewer to imagine a scenario from the experience of looking on the predominantly black and white photography. Vernissage(s) Jan. 24, Centre Clark (5455, de Gaspé, #114), 8 p.m.

At ARPRIM this week, an all-encompassing audiovisual installation by Philippe Blanchard will be on exhibition, entitled Nouveaux Troglodytes. A synchronized array of projectors and strobe lights will light up sculptures in the room, all to a very trance-like soundtrack. It’s a play on caves, fire, prehistoric lives and worlds of the past. Vernissage Jan. 25, Arprim (Belgo Building, 372 Ste-Catherine W., #426), 5:30 p.m., free

This week, Living in 10 Easy Lessons heads to Articule. The arguably controversial video installation by Linda Duvall and Peter Kingstone focuses on the lives of sex trade workers. Each film features featuring lessons taught by the sex workers (one example is how to apply fake eyelashes) featured in the films. Vernissage Jan. 25, Articule (262 Fairmount W.) 7 p.m., discussion Jan. 26, 3 p.m., free ■

Check out our complete listings for more great performance, stage and gallery events.