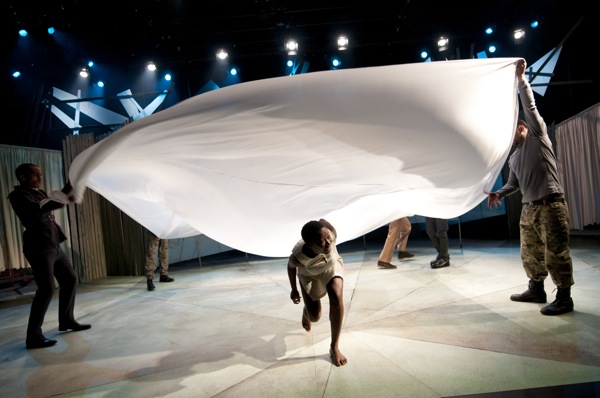 Chuma Sopotela in Waiting for the Barbarians. Photo by Andrée Lanthier

Pretty much every English theatre in town is launching a new show this week, as everyone bounces back from the holidays with fresh productions. Here’s what’s on the menu.

The Centaur wraps up its production of Godspell this week, a musical about a young hippie by the name of Jesus H. The piece is the first presentation by a new local theatre company, Beautiful City Theatre. Jan. 31-Feb. 2, Centaur Theatre (453 St-François-Xavier), 7:30 p.m., $35

The Segal Centre mounts the Canadian debut of Nobel-winner J.M. Coetzee’s Waiting for the Barbarians, a meditation on the dangers of exclusion, cultural paranoia and the violence of creating “others.” The play marks the Segal’s first major international production, bringing the highly regarded Cape Town, South Africa Baxter Theatre Company’s cast to Montreal to our chilly midst to perform this heart-rending literary masterpiece, adapted and directed by Russian-Montréalais Alexandre Marine. To Feb. 17, Segal Centre (5170 Côte-Ste-Catherine), Sat-Thurs, showtimes vary, $24

Infinithéatre takes on its own lit classic, Franz Kafka’s “A Report to an Academy,” adapted by director Guy Sprung as The Ape. The show features an ape (played to perfection by Howard Rosenstein) named Redpeter, who has trained himself to speak, act and go on benders like a real human, presenting a report to the Graywater Corp. (clearly a reference to the private militia formerly known as Blackwater), about the pains of undergoing cultural assimilation as a means to greater freedom. To Feb. 17 Bain St-Michel (5300 St-Dominique), Tues-Sat 8 p.m., Sunday matinée 2 p.m., $20-25

In collaboration with the National Arts Centre, Centaur launches an original work by Beverley Cooper, Innocence Lost: A Play About Steven Truscott, the story of the Ontario boy of 14 who was wrongly accused and convicted of raping and murdering his 12-year-old classmate in 1959. Truscott always maintained his innocence, and was eventually cleared in 2007 after advances in DNA testing proved his claim. The tale still goes down as one of the grossest injustices of the Canadian legal system (and a resounding condemnation of capital punishment, since the boy was initially sentenced to hang before his sentence was commuted). In short, bring tissues. To Feb. 24, Centaur Theatre (453 St-François-Xavier), showtimes vary, $36

The pros at the Black Theatre Workshop are touring a show around the city’s public schools in honour Black History Month. Chimwemwe Miller’s When Elephant Was King is about the journey of a young pachyderm named Tembo, who sets out to return stories to a land that has forgotten them. Call 514-932-1104 to see about having the play show at your progeny’s school. Public show Feb. 24, Black Community Resource Centre (6767 Cotes-des-Neiges), 1 p.m. and 3 p.m., $10/$6 for kids under 12. ■

Check out our complete listings for more great stage, performance and dance events.