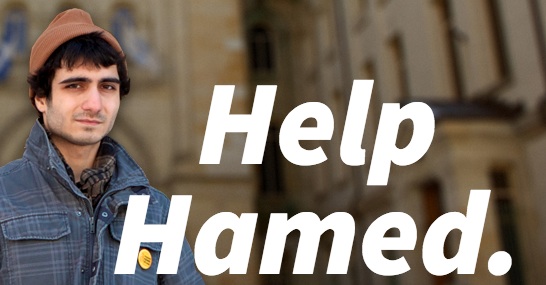 Screenshot from the website set up to help expelled Dawson student

Hey, look, another Quebec Liberal leadership debate happened yesterday. And what do you know? Everyone involved — Philippe Couillard, Pierre Moreau and Raymond Bachand — showed mad love for federalism. One idea we did like, and not for purely selfish reasons, we promise: Moreau’s suggestion to make the Charbonneau Commission permanent.

Oh, yes, the Charbonneau Commission, which at long last resumes today. It didn’t take long for Alexandra Pion, a one-time receptionist for Union Montreal, to say that Mr. Three Per Cent himself, Bernard Trépanier, had asked her to count cash, a request she denied. Fittingly, the funds were held together by rubber bands. At press time, the Commission had gone on its morning break.

Back in mid-November, Dawson College expelled 20-year-old computer science student Ahmed Al-Khabaz for uncovering some “sloppy coding” that basically gave anybody with a general sense of the on/off function on their laptop unfettered access to current and previous students’ personal info. Though it happened a couple of months back, it hadn’t been made public until yesterday, when Ethan Cox, reporting for the National Post, broke the story. In his piece, he wrote that Al-Khabaz alerted Dawson and Skytech, the makers of the flawed software, to the system’s vulnerability — and the college responded by giving him all zeroes in his courses and expelling him. A website has been set up to rally support behind Al-Khabaz. Somewhere, Anonymous members are gleefully wringing their hands.

In other news, anyone got a cool $325,000 to lay down for this place (specs here)? We can’t promise you’ll make Grammy award-winning music in it, but it’s at least a pretty cool spot for a Superbowl party.

Finally, presented without comment: Five people were wounded at gun shows in the States this weekend when firearms went off inadvertently. ■