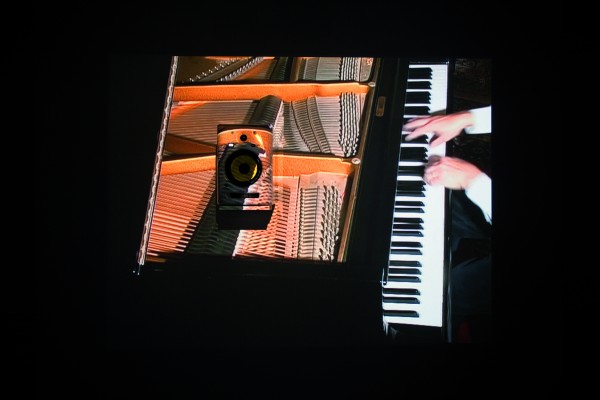 Currently on view at Galerie UQAM is a solo show of Michael Snow, aptly called Solo Snow. At 83 years old and as one of the most prolific and internationally recognized Canadian artists, Snow is indeed a force of living art history.

Apart from his experimental films (1967’s Wavelength is generally understood to be a watershed), Snow is a highly accomplished musician, visual artist, composer, writer and sculptor. He is famous, even notorious, for his ability to switch from one medium to another outside of any predictable sequence, and noted for a multi-disciplinary approach to his work.

Curator Louise Déry has astutely acknowledged that this exhibition does not attempt a comprehensive or conclusive survey of Snow’s work, but rather presents several moments of production that can be looked at in relation to their antecedents and precedents within the space of the gallery.

Indeed, the dozen nor so works gathered here — video installations, “real-time” participatory works, musical and experimental sound works and photography — offer themselves less as art-historical artifacts than as vehicles for an ongoing interrogation of relationships. I realized that while each of them was asking for my attention on slightly different registers and with varying combinations of means, it was something quite specific to each.

Long black walls divide the north end of the gallery into thirds, giving three digital projection works ample space. While all have been produced within the past ten years, each demonstrates entirely different ways of exploiting time and imaging technology.

“Condensation: A Cove Story,” is a highly processed time-lapse sequence of images taken of a Maritime cove; “condensation” refers to the fog and water vapour that clouds the screen at moments, as well as to the condensation of time implied by the time-lapse process. “Solar Breath/Northern Caryatids,” on the other hand, records a wind phenomenon at a remote cottage window over a sixty minute period of time, and uses no post-production technology. The background noise of Snow in the kitchen anchors this eerie scene in the everyday. Real-time and art-historical time converge in the third installation, “Corner of Braque and Picasso Streets.” This is an in-situ real-time video work, which records and projects the corner of Berri and Maisonneuve onto the gallery wall. The “cubist” white blocks and plinths assembled in front of the would-be screen are a witty gesture of reversal of Cubism’s flattening of space: here it is redistributed synthetically after it has already been re-processed as a 2-D projection.

The formal, semantic and temporal aspects of language are active ingredients in Snow’s work, to an extent I hadn’t realized until this visit. It’s clear he takes great joy in language, less for its ability to define and consolidate meaning than for the unwieldy chains of association that similar words can spark. The exhibition title is only the tip of the iceberg (“yes, it’s the solo show of Michael Snow, called SOLO SNOW”). In most cases, he has authored the wall text too. While partly devoted to describing the technical processes involved, the texts — normally our beacons for sensible contextualization — often “explain” with refractive and recursive references. The narrative video work, entitled SSHTOORTY (2005), is an exercise in layering and looping of transparencies. Formally, the subtitled film has been cut in two and superimposed on itself, blending dialogue, colours, gestures and “befores” and afters”; the title is a hilariously literal superimposition of “short” and “story.”

On the other hand, the soundless video work “Dis/That/Cela” displays three different languages, one word at a time, on each of the three screens. By speeding one up or slowing another down, they “say” the same thing at exactly the same time. In both works, however, you’re hard pressed to “get it” all at once.

I was pleased to step into an “Observer” work (1974-2001), a real-time visitor participation piece where you step onto the X on the floor and are rewarded with the rare glimpse of the top of your head, now projected on the floor at your feet. It struck me that this feeling of vertigo really characterizes Snow’s work in general. The works, through technology or circumstance, consistently negate a complete picture in order that you might glimpse something else, something new, from that oblique angle.