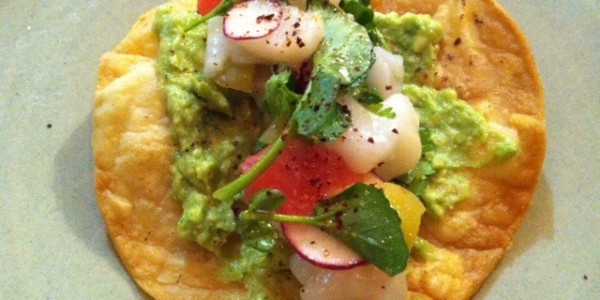 Residing where the Mile End empanada pros La Chilenita were once located, on St-Laurent between St-Viateur and Maguire, Mais is only a couple weeks old but already has a devoted following of taco-loving, tequila-drinking patrons.

“It’s like a beach house kind of vibe,” explains restaurateur Dave Schmidt, who also co-owns Sardine just down the street on Fairmount.

I can’t tell whether it’s ambitious to open two restaurants in a year, or just plain crazy, but Schmidt is the first to admit it may be both. When the owners of La Chilenita went by Sardine dangling their keys and explaining that they’d be closing soon, Schmidt saw a great opportunity.

Along with Sardine partner Peter Popovic (who also co-owns Magpie and the Sparrow), they decided the space was too good to pass up and joined forces with chefs William Cody and Gilbert Macnutt.

After a total makeover reminiscent of a (highly stylized) shack by the sea, including the additions of coloured fairy lights, bottles hanging from the ceiling, a big, long communal table in the centre of the room, plenty of seats along the bar and four barstools in front of the kitchen, the vibe is warm, welcoming and convivial, to say the least.

They don’t take reservations, so you might want to try to get here early or late to snag a table right away. If you do have to wait, they’ve created a small bar-like area overlooking the open kitchen where there are plenty of affordable drinks to make the time fly by, including cans of Tecate, beer on tap, a killer cocktail list and, of course, tequila. I highly suggest the lime margarita, which is strong but good, and is served the traditional way — on the rocks.

The menu is short and sweet, with a seasonal assortment of choices featuring a couple appetizers and five or six different tacos, as well as family-style option for groups. We started with the ceviche tostada ($8), a fried tortilla piled with glistening pieces of citrus-cured scallops — a bright, fresh and a perfect way to begin the meal. Next up we had some tacos: their take on carnitas ($3.50), pork belly ($4) and the fish and avocado ($4.50). I have a soft spot for street-style tacos, so the carnitas, with braised beef shoulder and neck and a little salsa verde, stole the show for me. Simple flavours done right. I’m definitely going back just for this baby.

A close second was the pork belly, served on top of a luscious black bean cream, followed by the fish taco (Arctic char that night), pan seared to perfection and served with a smear of guacamole. I also need to mention their homemade hot sauce which, served in a sort of medicine bottle, is an awesome addition to all these tacos and definitely has a nice hit of heat.

Although Montreal has been a bit slow and sloppy with its Mexican food, Mais is definitely a place that does it right. From atmosphere to drinks, food and service, the Mais experience is definitely one that I’ll go back for. ■