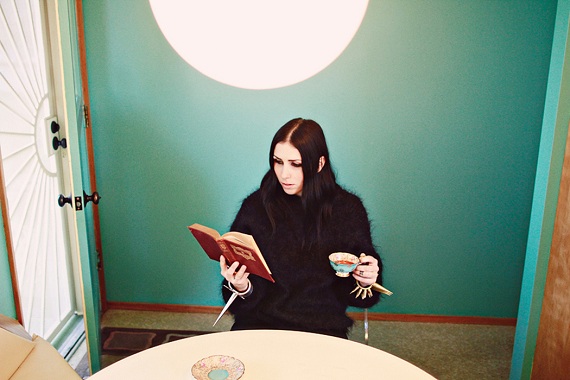 At once gorgeous and gritty, tenebrous and effervescent, Chelsea Wolfe’s music has a rare quality that is instantly appealing. Her sound is greater than a mere sum of styles, though its foundation is clearly cut from folk, blues, drone and metal. The latter two are more prominent on her first pair of records, The Grime and the Glow (2010) and Apokalypsis (2011), whereas last year’s Unknown Rooms sounds relatively stripped of Wolfe’s harder tendencies. That said, its songs still strike with a driving force.

Currently touring the frigid northeast with her drummer/keyboardist/producer Ben Chisholm and violinist Andrea Calderon, Wolfe took time to answer some questions, ahead of her first headlining show in Montreal.

Lorraine Carpenter: Your bio mentions a nomadic performance group that you toured with in 2009. What kind of group was it?
Chelsea Wolfe: It was a group of performance artists from all over the world, based in Estonia. My good friend Steve Vanoni, who’s a great artist and who has taught me a lot over the years, invited me along on this European tour to be the resident musician and just to get away from everything for a while. I just brought along my guitar and would play shows at the end of the night.

LC: What did you bring from that experience to being a working solo musician?
CW: That trip came at a time when I had actually stepped back from music for a while because I wasn’t happy with the music I was making and felt pretty lost and uninspired. But experimenting with my voice and new songs in front of really lovely, open audiences in such rad spaces was really good for me. I learned a lot about performance, and I learned a lot about my own voice. The places where the shows were held was so varied: old factories, art galleries, outdoor spaces, basements. When I returned to California, I started taking my eight-track around and recorded my first released album, The Grime and the Glow.

LC: Are the seemingly disparate styles of music that you work with representative of the kinds of music you listen to, or do you seek out fusions of them?
CW: It’s representative of my taste in general, I suppose, which is really varied. I appreciate rich, decadent, flamboyant art and film, and I also love minimalism, simplicity, stark visions of reality, white noise, old country, dreaminess and mysticism. I don’t like to stay within one genre, and actually don’t think I could. Even my acoustic album is really my own definition of “acoustic” — it’s got electric piano, synths, a cappella.

LC: What differentiates your latest, “acoustic” record from your other material, in terms of the creative process?
CW: I had to include “a collection of acoustic songs” in the title because the songs span a time period of about five or six years. I started working with Sargent House last year, and they suggested I release all the old acoustic and folk songs that I’d played live or demoed but never actually put on an album, because those were some of their favourite songs. When I started gathering the old recordings together and thinking about it, I became inspired and actually re-recorded a lot of the older songs and also wrote some brand new songs for the album. It was a fun project.

LC: Can you tell me a bit about what your next record is going to be like, and when it’s coming out?
CW: Hopefully this summer/fall. It’s got full band songs and solo songs. It’s got some electronic songs we’ve been working on over the past couple years. It’s a very emotional record.

LC: Have you played Montreal before? If so, how did it go?
CW: I played there once, opening for Russian Circles. I remember the crowd being rowdy but kind. It was a good time. I met Audrey [Cantwell] from the clothing line Ovate, which I’m a big fan of. I also met a nice black cat on the street and was too shy to speak the little French I know. ■