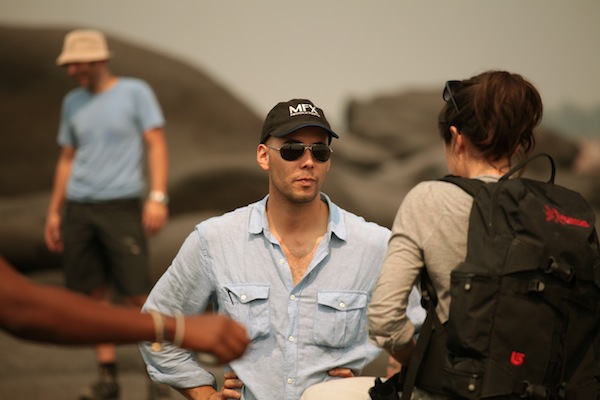 Kim Nguyen on the set of War Witch

Canadian and/or Quebec movie fans, not to mention Montreal film boosters, got a treat this morning when Kim Nguyen’s War Witch (also known by its original French title Rebelle) made the list of nominees for best foreign language film at this year’s Oscars. Cult spoke to Nguyen, who described himself as “completely ecstatic and dumbfounded,” and producers Pierre Even and Marie-Claude Poulin on a hastily arranged phone press conference to talk about the good news.

The film’s competition in the category is marked by Michael Haneke’s Amour, which is also nominated for best picture (along with several other major awards). “Strategy-wise, we’re clearly the underdog in regards to Haneke. He has such a strong legacy,” says Nguyen. “But I think we’re a strong contender. The fact that he’s nominated in two categories might be to our advantage. But maybe he’ll win both,” he laughs.

In case you missed War Witch on its local release last year, it’s a powerful story about an African child soldier (15-year-old Rachel Mwznza), told in a poetic style with a core that’s emotional without ever succumbing to Hollywood-style sentimentality. “A portrait of 21st-century sub-Saharan African hadn’t been made, with all its paradoxes,” says Nguyen. “It’s not just an educational movie about child soldiers. it’s also a love story… that’s what we found when we did research, these love stories that come up in the middle of these war-torn societies. They’re child soldiers, but they’re also in love with a girl and angry when she doesn’t come home.”

The nomination comes on the heels of a Gazette article talking about a record low in local box-office revenue for Quebec films, prompting talk of a crisis in Quebec cinema. With an irony deliberate or otherwise, this article is illustrated with a photo from the year’s “major” release: Omertá, a cheesy mob movie starring René Angelil. Meanwhile, as a Telefilm honcho made a point of noting in her introduction to the press conference, this is the third year in a row that a Quebec film has been nominated at the Oscars (after Denis Villeneuve’s Incendies and Philippe Falardeau’s Monsieur Lazhar).

“I don’t have an opinion on it,” says Nguyen of this supposed crisis, before making an understated dig at paint-by-numbers cinema: “If you try to do films like a recipe, you basically fail. You have to trust your instincts and hope that the institutions trust your instincts as well.” As for poor box office numbers, he points out that “this film kind of compensates for that, since we sold it in 25 countries.” For his part, producer Even says “Our films are on the first tier of worldwide cinema — there’s no crisis here.”

Nguyen and the producers are preparing themselves for the final, vital leg of Oscar schmoozing and hustling, but Nguyen has the most important elements: a crucial mix of talent and a little piece of superstition courtesy of our other recent local nominees: “50% of the success is making the film, 50% is eating Lucky Charms cereal. That’s what Denis Villeneuve and Philippe Falardeau told me,” he laughs. ■