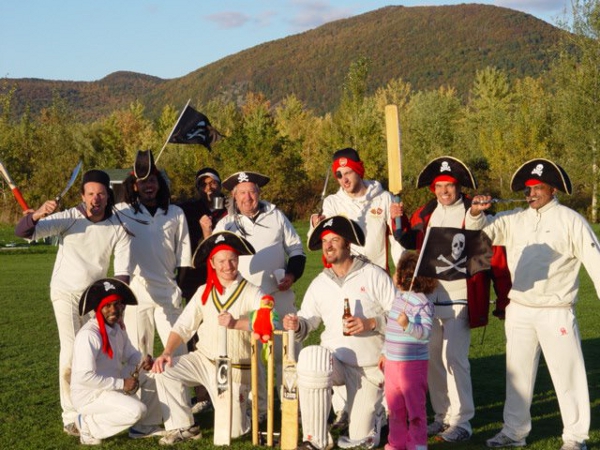 Bell (centre-left, on one knee) and the Pirates of the St. Lawrence in warmer times, photo by Karen Roche

Montreal has a pre-eminent cricket guy, and his name is Angus Bell.

The Scottish expat, who moved here in 2003 to pursue a Québécoise he was smitten with, has done his best since arriving to educate us bad Commonwealthers on his other true love. For the last six years, he and his squad, the Pirates of the St. Lawrence, have hosted the Snow Cricket World Cup.

Because it swaps a nice, finely manicured wicket/pitch with a snowy one, the snow cricket format is actually the best way for curious non-cricket players to introduce themselves to the sport. Bell, of course, has become quite adept at making cricket seem like the easiest thing in the world to get into.

“You can break it down to see ball, hit ball,” he says. “The most important thing with snow cricket is you have to dress like a ninja on the Scottish ski slopes — warm and all over — so that restricts your movements. We also use tennis balls instead of hard leather balls.”

They currently have about 60 players and six teams (Canada, England, Australia/New Zealand, Asian Bloc, African Alliance and the Celts, equal parts born-and-bred Montrealers and expats) signed up to compete in the World Cup this Sunday, although the rules are pretty loose and anyone who shows up in warm attire will be allowed to play. Visibility and accessibility are key in promoting the sport in Montreal, says Bell, who in the early days assembled a small group of cricket players by practicing on Mount Royal (next to tam-tams) and collecting email addresses from strangers who approached him.

“I’d get approached by octogenarian Australian ladies who said they hadn’t seen cricket in 50 years,” Bell recalls. “I used to get stopped in the streets by people who recognized my equipment because they had seen La Grande Séduction.”

Since forming in 2007, Bell’s Pirates of the St. Lawrence have gone through nearly 400 members, from obsessed ex-pats to first-timers. They practice weekly at Jarry Park (as well as a pitch on the South Shore Bell says is one of the finest in North America), and come this June they’ll have Montreal’s first public batting cage at their disposal, at Howard Park in Parc-Ex.

“I think it’ll transform the dynamic of the game here,” he says. “Kids will be able to practice after school or whenever they want. There’s huge potential for the game here; it just needs to open its doors to youth and provide more facilities.” ■