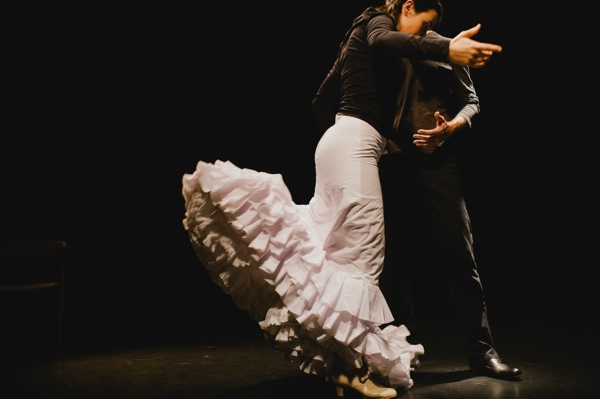 Don’t expect to see any flouncy dresses at la Otra Orilla’s neuvo flamenco show HomoBLABLAtus. Well… there is one big pink flouncy skirt, but it’s worn by two people. Simultaneously, that is.

In terms of dance forms, flamenco tends to be fairly traditional — an extra instrument in the line-up can make all the senoritas blush. La Otra Orilla’s co-founder Myriam Allard’s rebellious choreography tends to be deliciously subversive. The elements of flamenco are all present in HomoBlABLAtus  — the handclaps, the rhythmic foot stamping, the drums, the vocal solos (performed by co-founder Hedi “el Moro” Graja). However, everything is reimagined with a defiant certainty. The opening has Allard lying on her back, her feet tapping out rhythms against a white wall. Later in the production, Allard performs in one shoe, having flicked the other off in anger. This is not flamenco for the purist, but the punk.

As the title HomoBLABLAtus (Incessantly Talking Man) implies, a recurrent theme of the work is that speaking isn’t the same as being heard. Failure to communicate is a surprising topic for an art form not associated with words. Of course, communication need not be verbal, and flamenco is, if nothing else, expressive. Multimedia clips bathe the performance with sounds and images.

Overall, HomoBLABLAtus consists of dance and multimedia vignettes connected by a loose narrative about an over-the-phone break-up. The scene is a perfect example of the show’s willingness to toss convention in favor of experimentation. Allard dances her part of the fateful conversation while a film clip projects her soon-to-be-ex (Antonio Arrebola), dancing his responses beside her. To stress the emotional impact, parts of the scene are repeated at faster speeds, as if recollecting the most stressful parts of a conversation.

True to the spirit of flamenco, emotion remains at the core of the work. These are not just the basic emotional states, but complicated and contemporary ones. The break-up scene shows the frustration, desperation, self-aggrandizing and even hopefulness that take place during a difficult conversation. In a later scene Allard captures the horror of feeling overwhelmed. She dances as part of a group sales pitch for a book on the Art of Making Small Talk. As the others involved in the pitch lapse into orgiastic madness, she dances faster and faster, ignored and reduced. Even the vignette where two women share a single skirt presents feelings of ambivalence. The two seem to reflect an internal dispute between one’s desire to be aggressively sexual and appropriately feminine.

Though eschewing tradition, the work abstracts enough of flamenco’s bold, expressive character to hold the form. It is a mistake to assume that challenging the status quo means sloppiness. To the contrary, all aspects of the work demonstrate lynx-eyed attention to details and a love of precision. La Otra Orilla demonstrates yet again that Montreal’s dance scene is both innovative and exciting. ■