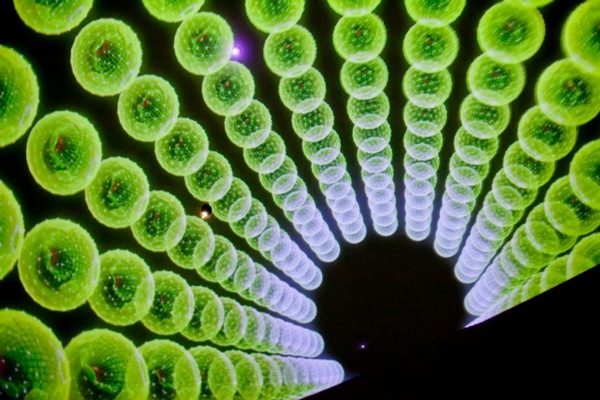 Friends, I almost never tell you what to do. But I command you now to grab a pal, smoke something barely illegal over a shared king-can of Grolsch in a paper bag, and head to the SAT to dive into the 230° projection surround-sound lava-lamp that is Chaos & Order.

The brainchild of German team Rocco Helmchen and Johannes Kraas, the combination of the SATosphère’s immersive overhead screening space and the bone-jarring volume of the score serves to make the experience almost completely synaesthetic. Throw in the banks of cozy reclining roller-couches to watch from, the lovely bar just outside the doors (yes, you’re allowed to bring a drink in for the show) and the option to graze on Foodlab’s reasonably priced Szechuan-themed menu before and after, and you’ve got yourself a killer recipe for a full evening’s entertainment, without ever stepping out into the hoary horrors that await outside.

To review the show, I headed in with a nice glass of Pinot, drawing envious looks from showgoers who were less practical and forward-thinking. For the first five minutes I wished I was high, for the next 40 I felt like I was. There were even moments that could potentially trigger, in a purely hypothetical former drug enthusiast, a strong memory of past times spent on hallucinogenics in a really fun and fascinating way, not that I’d know. Anyhoo.

Conceived as a mathematical symphony, the show proceeds in four movements, each a math theme or subfield: form, simulation, movement and fractal. New media artist Helmchen’s constantly morphing and moving 3-D renderings of math concepts and formulae are brightly coloured and truly beautiful, breathing new life into abstract and difficult geometries. This theme also serves to make the show quasi-educational (look Ma, a mandelbox fractal!), but overall the experience is kind of like being sucked into one of those mid-90s geometric PC screensavers — which, for the record, is intended as a compliment.

Composer Kraas’s soundtrack frequently strays into the Avatar-ish cheesy sci-fi synth realm, and at a few moments the world music-y synthesized guitar picking made me near-rabid (packing your own ‘pod would be a real option). But at other times the scoring was bang-on, and the heavy bass reverberating through the floor and into my bones definitely contributed to the immersion that makes the show work so well.

Overall, friends, this could well be the ultimate winter dating option: a bit of puff, a nice bar, a dreamscape and some amazing Chinese chow for sharesies: you’ll be fucking like lions less than an hour after the bill’s paid. ■