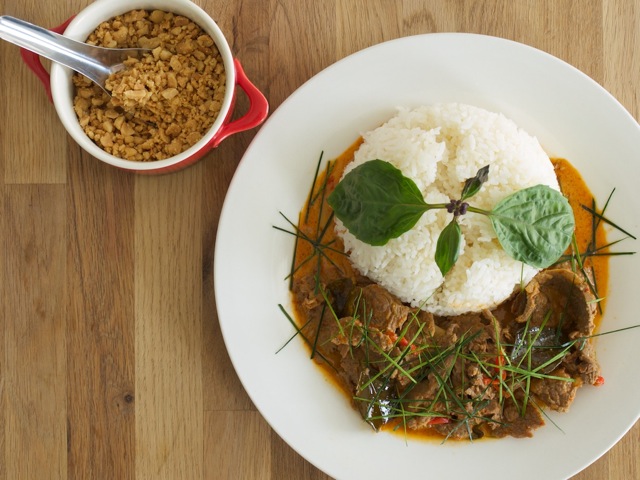 For anyone who’s ever been to Thailand and fallen in love with the food there, I’m sure you know exactly what I mean when I say that since then, I’ve been on a constant search to experience those incredible flavours on this side of the world. Never quite finding them, it has become the culinary equivalent of chasing the white rabbit, Thai style.

When some friends told me about a new Thai delivery service called Chak Wow that catered to the Little Italy and Mile End areas, I wanted in. The dish that arrived at my door that night — my personal favourite, green chicken curry — blew me away. Not only did it look totally legit, but it brought me right back to sitting in plastic chairs on the beach, drinking Chang beer and enjoying a spicy, creamy, blow-your-mind delicious curry.

The man behind Chak Wow is 30-year-old Jesse Mulder, who hails from just outside of Edmonton, AB. After traveling to Thailand on his way to Australia, he realized that Southeast Asia was where he wanted to be, and after a couple of years of going back and forth, he finally made the move to Thailand, where he lived for almost four years.

“I had a Thai family who I met and stayed with in Bangkok, and my Thai ‘mother’ basically taught me how to cook. My first time in Thailand, I did all the cooking courses, so that established a foundation, but, really, I learned from living with this family. Every day she would cook for me, then she would take me into the kitchen and show me different techniques. It was awesome,” Mulder explains.

Inspired by the void left by defunct Vietnamese delivery sensation Coq Asian, Mulder decided he wanted to recreate unique, authentic dishes he learned to cook in Thailand with a delivery-only-type of food service. The short menu is made up of a curry special each week, a morning glory, garlic and chili veggie stir-fry, a green papaya and dried shrimp salad and pork or vegetarian dumplings. It’s a pretty safe bet that no matter what you order, it will be good. Everything is $10 and under, rice included, making it an incredible deal.

“I want all of my dishes to be unique in the sense that you won’t find them in a typical Thai restaurant in the West. Obviously you’re going to find some of the dishes, like a papaya salad, in most Thai restaurants, but it’s not authentic like the way that I make it.” And having tasted Chak Wow’s papaya salad, as well as many other papaya salads, I have to agree.

“When it comes to the curries, I have to do staple curries that are known and loved, like your red curry and your green curry, but I also want to try and introduce people to the lesser-known, more regional tastes of Thailand,” says Mulder. Like his favourite, Nam Ngiaw, a Burmese pork belly curry found in northern Thailand Mulder describes as a Thai bolognese, but way better.

Open from Wednesday to Saturday, from 5–8 p.m., the best way to reach Chak Wow is through its Facebook page. It’s recommended to place your order the day before by sending a Facebook message, emailing or calling (438-862-6134) — they sell out fast.  Also to be noted is that currently, Chak Wow’s delivery zones are limited to Mile End and Little Italy, since the delivery woman extraordinaire, Kathy Daehler, bravely does it all by bike, solo. Yes, she was even out last week, and, yes, no matter the temperature, the food still arrives at your door warm! They will have a car soon, though, so if you’re just out of the zone, it won’t be too long. ■

We spoke to manager Olivier Bertrand about changes in live theatre, past and present.