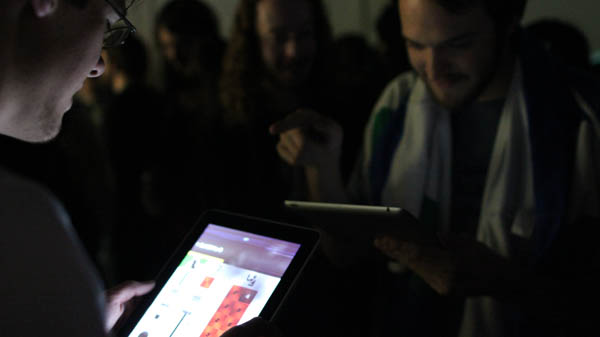 In Spaceteam, everyone can hear you scream.

There are enough iOS games out there to fill a whole galaxy, but few (if any) of them are exclusively local multiplayer, meaning you have to be in the same room as the people you’re playing with.

Local developer Henry Smith left his job as a user interface programmer at BioWare Montreal to go indie in order to rectify the oversight. In three months, he’s managed to fill the void with Spaceteam, a ridiculously fun two-to-four-player game for iPhones and iPads. You and your friends pilot a lemon of a spaceship through anomalies and slimy disasters by toggling and twisting a console full of absurd, technobabble-laden knobs and switches.

The caveat is that the directions on how to fly the ship, which appear at the top of the screen, might not apply to your panels, so you’ll have to yell out the orders and hope your crew members are listening. They, of course, will be busy barking their own orders around the room. To an outside observer, an average game of Spaceteam looks like quartet of stressed-out multitaskers staring at their iPhones, shouting things like “Enable volatile flangereceptor!” and “Reverse polarized flowshaft!”

“It’s a great spectator game,” says Smith. “It’s a strange sight to see people shouting at each other, and just by looking at the iPad screen, it’s easy to tell how to play the game. You don’t really see a lot of local multiplayer games on iPhones, but I’m also a big fan of board games and I wanted to create that atmosphere.”

In order to find out if Spaceteam was any fun, Smith had to create his own party environment in which to test out his prototypes. “I organized these Spaceteam potlucks. I invited people over, cooked up chilli, and we’d play. We’d try to get two games going at once. If it wasn’t for those potlucks, I wouldn’t have gotten a bunch of cool ideas that came out of watching people play.”

For instance, Smith observed that his francophone friends were having a bit of trouble reading out the technobabble, so he developed another mode that uses hard-to-decipher symbols instead of words. He also decided to go with random, non-spacey console panels, like “Form committee!”

“A lot of people have told me it’s a great drinking game,” he says. “We made sure there was always wine and beer at the potlucks.”

Spaceteam is a free download, largely because it requires at least two people to play, and it can be hard to convince someone to purchase an app they’ve yet to try. Instead, the symbol mode, new console panel designs and player costumes can be purchased as add-ons.

“It has a very niche market: it’s noisy, you can’t play it on the bus, and once you lose you have to start all over again,” Smith says. “It’s more a game that’ll be spread through word of mouth; it’s a game that’s more fun when you show it.” ■

Spaceteam is available now on the App Store.