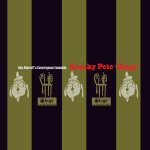 So much “jazz product” spews out of Toronto that dogs ought to be trained to sniff out the Diana-Krall-wannabe bombshells before the shrapnel hits the fans. But among the Ville-Reine fluff are some true gems, like this Saturn-inspired double-CD set from guitarist Ken Aldcroft’s Convergence sextet.

The solo spots offer clues to the proclivities of the band’s instrumentalists. Aldcroft’s turn begins with a series of Bailey-esque minor second intervals, followed by rapid-fire inside/outside boppish lines, finishing with repeated notes stretched and hammered to their textural limits. Trumpeter Nicole Rampersaud’s long tones create a slow, keening lament, and her duet with drummer Joe Sorbara remains free while hanging on to a theme.

Among the sextet tracks, “Insight” has a free-funk feel, with heavily syncopated drums forming a base over which horns honk and the guitar trills. Everyone drops out for Evan Shaw’s sax solo halfway through, evoking an Evan Parker feel as the band sneaks back in. “Berne-ing” is aptly titled, informed by and reminiscent of NYC saxophonist Tim Berne’s multi-section works with knotted heads.

Slugs, disc 2’s six-part Suite for Sun Ra, refers to the East Village club where the Arkestra held a residence in the 1960s. There are moments in the Suite that indeed conjure heliocentric worlds, such as the intro to Part IV, where the horns growl and gruff in ragged non-unison.

Elsewhere, a trombone solo from Scott Thompson kicks off Part VI with a smearing sputter, before Wes Neal’s bass earns frequent flyer points travelling the spaceways with familiar Ra riffs and a vaguely Arabian motif emerges from the horns and then guitar. Nevertheless, the side as a whole is as much Convergence as it is Ra, and that is not a bad thing.

Convergence is neither a jazz crew playing tunes nor a free-improv unit, slipping from one to another both within and between songs. While I am as addicted as anyone to energy music’s sugar high, Aldcroft’s formula leads to an ultimately more satisfying full-course banquet.

Step into the indie pop dream sequence devised by Brooklyn’s Widowspeak with this preview of their sophomore LP, Almanac, out Jan. 22, 2013 on Captured Tracks. RIYL Mazzy Star.

Wavves, “Sail to the Sun”

San Diego’s Wavves will release a new record in the spring, guided by dubious pop producer John Hill. Luckily, this lead single, and its video — depicting the dodgy afterhours antics of an evangelical preacher, directed by BLACK // DOCTOR — suggest that they haven’t jumped the shark just yet.