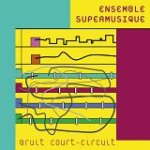 The spark plugs at Ambiances Magnétiques have been energizing the musique actuelle field since René Lussier conducted 1983’s Fin du travail, and the label’s current catalogue is now overloaded with 229 releases. Long in sync with Victoriaville’s annual Musique Actuelle festival, it is no shock to learn that their latest project, whose title translates to “short circuit noise,” premiered at last May’s FIMAV.

The CD features six tracks from five different composers. Previous projects included canoe trips and works about the seasons, recalling the earthier times before we all got lost in an electronic flux. Bruit Court-Circuit charges towards more modern developments, and, given past themes, can perhaps be heard as a warning as much as it is an embrace of technology.

This is most clearly suggested in Tétreault’s “Malgré Tout, Face A,” which starts out with a simple drum meter, quickly followed by bursts of impulsive and dizzying noise from the rest, but ends with Hétu’s vocalization of basic human physical and psychological qualities. Thus we cycle from corporeal beats to industrial noise and back to our natural characteristics, from which we cannot escape, regardless of progress.

It is sometimes difficult to source the sounds. Careful listening can provide clues based on placement in the mix, as each member is given their own corner, but puzzles remain. Is that drumbeat from Tétreault’s vinyl or Côté/Roger? Is the Beethoven cello sonata quote live or Memorex? Is that high-pitched wavering sound flute, sine wave electronics, amp/mic feedback or a fuse of all three?

This is classic actuelle from the inventors of the genre. Fighting against technology’s tendency to black out human ideals, a ceaseless spirit of positive fun pervades the disc. Electrifying music and a thoughtful message upon which to end the year.

Bringing his monthly single series Phases to end, Montreal’s Montag (aka Antoine Bédard) released “The Last Call” today, intentionally timed two days before the Mayan apocalypse. Pour yourself something potent, sit back and drink it in — the song, that is, with the beverage. It’ll go down smooth.

Digits, “Love Is Only Affection”