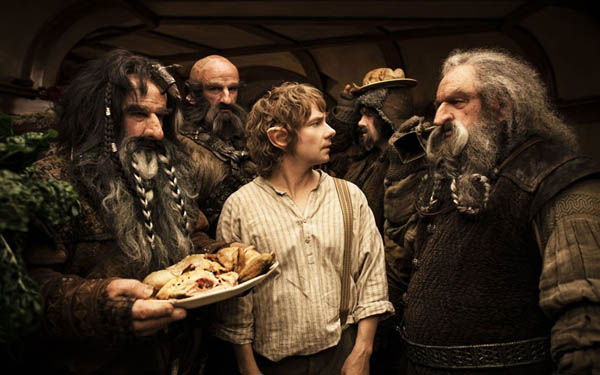 Being from a family of bookworms meant that my formative years were shaped by a number of diverse literary luminaries, but it was my dad’s tattered old copy of J.R.R. Tolkien’s The Hobbit, with which I learned how to read English, that gave me the final push down a path of non-stop cool-dom. Nothing says “hip” like a strong, independent woman who still thinks dragons, elves and magical made-up worlds are pretty awesome.

This autobiographical tidbit is to inform you, world, that there’s a special place in my heart for Tolkien’s fantasy tale about a harmless hobbit going on an adventure with a bunch of dwarves, and I was beyond pre-disposed to love this. When the trailer came out a year ago, I watched it 10 times in a row. I also watched all the production videos director Peter Jackson posted online, I bought the special edition of Empire magazine with Bilbo Baggins (Martin Freeman) on the cover, I geeked out with Stephen Colbert during his “Hobbit Week” and I spent the day prior to seeing the film re-reading the book (and I’m single!).

Predictably, Tolkien fans will be more than pleased with Peter Jackson’s opening opus to what is now a Hobbit trilogy, but that being said, like rabid Star Wars fans hate-fucking their George Lucas pillowcases every night, you might wake up in cold sweats in the middle of the night, clutching your imitation One Ring and yelling “WHYYYYYYYYYYYY! THOU SHALL NOT PASS!” in anger at Jackson and his gang of money-grubbers unnecessarily stretching a barely 300-page book into three films.

The Hobbit: An Unexpected Journey covers the first six chapters as extensively as it can in a whopping 170 minutes. If the book is also fresh in your mind, you may be wondering how the hell Jackson pulled that off. Easy. Instead of opening with the chapter where Gandalf the Grey (the fabulous Ian McKellen) stumbles into Bag End with 13 dwarves and the promise of adventure, the film begins with an older Bilbo (Ian Holm) writing to his nephew Frodo (my soulmate Elijah Wood, in a brief cameo) about, you know, that time with the dragon in the mountain and shit, followed by a very epic and grandiose re-telling of how Thorin Oakenshield (Richard Armitage), son of Thrain son of Thror, lost the Kingdom under the Mountain to a greedy dragon named Smaug.

Of course (I’m assuming y’all know the rest of the story, unless you were too busy smoking your parents’ cigarettes, listening to Sonic Youth and getting laid during your youthful days), this all leads to Thorin and his 12 hairy compadres showing up at Bilbo’s door, eating all his food, breaking into a wonderful rendition of “Misty Mountains,” and assuming the little dude will follow them on their journey to reclaim what is rightfully theirs, which, evidently, he does.

Other parts added to bulk up the story include turning Radagast the Brown (Sylvester McCoy), who is only briefly referred to as Gandalf’s wizard cousin in the book, into an actual character with a weird, unintentionally hilarious scene involving him travelling around in a bunny-led sled and desperately trying to revive an ailing hedgehog (spoiler alert?). Some added bits also feel like Jackson is obviously trying to force this into a Lord of the Rings prequel instead of focusing on the original Hobbit story, such as an unnecessary scene where McKellen expresses his worries about the state of Middle Earth to Saruman (an ancient Christopher Lee, weirdly looking like he’s been Photoshopped in), annoying Galadriel (a strangely immobile Cate Blanchett) and Elrond (Hugo Weaving).

Finally, the battle scenes, which Tolkien keeps very brief, barely stretching them out to two pages at the most, are fully developed and made bigger, better and mainly longer, leading my friend to poke me during the final scene to make sure I was still awake (I just shut my eyes for a minute, okay? Three hours is a long time when you’re ageing and wearing gigantic 3D glasses).

Geeky-as-fuck moaning aside, the extra films allow Jackson to stay frighteningly faithful to the best parts of the book — the Riddles in the Dark scene between Bilbo and Gollum (Andy Serkis) is worth the price of admission alone. Freeman makes for an excellent Bilbo, making me a bit verklempt a few times during the film, like any other normal person who gets a bit emotional when a hobbit starts talking about home and adventure and that sweet Shire melody kicks in (whatever, I also downloaded the “Misty Mountains” song to put on my iPod, so what).

As for the visual shit people keep yapping about, I saw the 24 fps 3D IMAX version, so I can’t tell you if my brain blew up, but I can say “that’s the future, deal with it” and also, “ah damn, I guess I’ll have to go see it AGAIN.” The image did get a bit wonky when I tilted my head, but maybe that was just the vodka in my Coca-Cola.

In conclusion, most ordinary folk with ordinary preoccupations, like jobs, politics and paying taxes or whatever, will enjoy this for what it is: a gigantic, expensive, epic, blockbuster wankfest and a three-hour escape from real life and worrying about matching furniture.

But for us fucking losers, no matter how much we complain about Radagast being a bird-poop dickhead and Jackson totally misunderstanding the deeper meaning of Bilbo finding and naming Sting, instead of Gandalf handing it to him as it happens in the film, we’re all pathetically overjoyed to be back in Middle Earth, and we’ll all happily hand over our rolled-up pennies to come back next year, and the year after, until we’re all left to contemplate our sad, empty existences in 2015. ■

Roxane Hudon is currently based in Glasgow. Read her reports and insights on Ballz Montreal. @roxanesballz on Twitter.