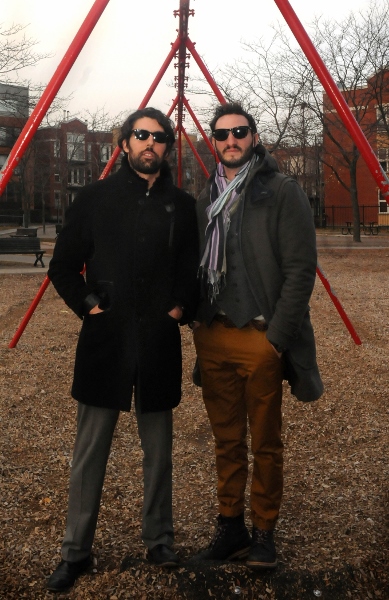 In high tide or in low tide, merry Maritime wise men of chiac party rap act Radio Radio rock the yuletide live and keep it jolly three-six-five. Gab Malenfant and Jacques Doucet rap bows around the magical loop-bags of producer Arthur Comeau, and in 2012 the local trio followed their star in a fourth excursion, to Hâvre de Grace.

On the eve of their traditional year-topping celebration, Gab and Jacques offer observations of Acadian Christmases past, present and future with signature good cheer.

“We don’t have tourtière, but we have meat pies. It’s not mincemeat, though — it’s more chunks,” Gab says. “But back home [in Moncton], I don’t think most people go to church on Christmas.”

“Back home, we still do,” interjects Nova Scotia native Jacques. “Actually, that’s the place where everybody meets up. You go to please your grandma. I don’t really go to church any other time of year than Christmas Eve, if I’m in Nova Scotia, just to make my grandma happy, and actually I have a good time. “After that, we usually go out,” he adds, “or we open the gifts, then we go dropping by an aunt’s or an uncle’s house.

“Actually, [during the day], usually we go out drinking, me and my dad. My mom doesn’t drink, so she drives us from uncle to uncle to uncle and we get a bit drunk and go to church a bit drunk, and, uh, yeah, that’s usually my Christmas tradition in Nova Scotia.”

“When I used to be in Moncton, five or six years ago,” says Gab, “Christmas day is the day when we’d usually have brunch with the family and we’d have a party at my house. And the next day, Boxing Day, I used to have a huge reggae party. A Boxing Day reggae dub party!” he says, laughing. “’Cause reggae is good for chilling out when you’ve been rushed from one thing to the next.”

In the here and now, the group is on peaceful waters with its “harbour of grace.”

“It’s been a bel acceuil, it was well-received,” says Jacques of Radio Radio’s latest, out last spring. “I think we did every festival in Montreal!” “It was good,” Gab says, “and the more we get down the road, the more people are saying they’re digging the album. I think it’s one that-”

“It grows on you,” Jacques chimes in.

“Yeah, like wine,” Gab agrees. “You have to put it in the carafe a bit, make it breathe. It’s been great.”

The future harkens to the past, they say, with a new album written for a fall 2013 release.

“We’re getting back to Cliché Hot a bit,” says Jacques, referring to the band’s 2008 debut. “Not so much in the themes — well, some of them, yeah — but it’s much more of a party album. Not that the other albums aren’t party albums, but — different party, I guess. This is more of a club party.”