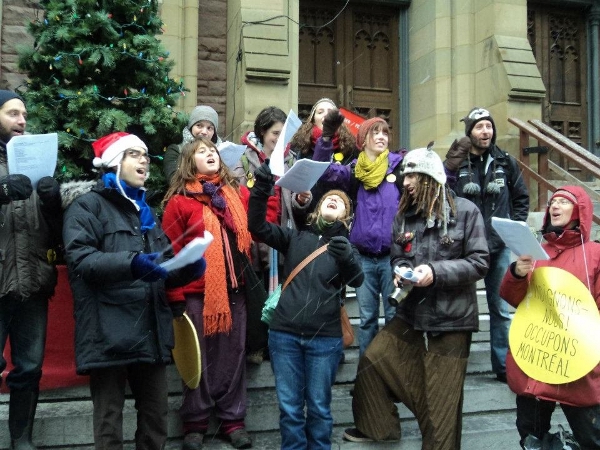 Hey, remember Occupy? Way back in 2011, activists of all stripes took over public squares in cities around the world. Here in Montreal, groups set up camp in Square Victoria, which they rechristened the Place du peuple. Denizens of the tent city lived and protested together for more than a month. Then, as December approached, the city said sayonara.

But the spirit of Occupy endures — apparently in song. In addition to a popular hashtag, those weeks in the park spawned a choir: the Chorale du peuple, a group of 15 activists-cum-vocalists who sing about social justice in both official languages to the tune of standbys like “The Ants Go Marching One by One” and “Take Me Out to the Ballgame.”

Today marks the release of the Chorale’s first album, Quelques notes du Printemps érable. Cult MTL spoke to Alain Mignault, one of the people behind the project.

Lucas Wisenthal: How did the choir form?
Alain Mignault: Initially, it was Dan Parker and Myriam V. who started doing improvisations with everybody at the camp. I joined them just at the end, and I proposed that we write songs that our more political than just improvisations. And we started finding songs that exist and modifying the lyrics. And we actually sang them in protests and different occasions, and often the crowd would start singing along. And it was very, very stimulating. We did that all winter — maybe every week. During the Maple Spring, the students sang a lot with us, and they started asking us if we had a CD. And we said, “No, we don’t have a CD.” One evening we were asked three times if we had a CD, so we decided maybe it would be a good idea to make one.

LW: The singers themselves — how did you find them? Were there auditions?
AM: We kind of did a little bit, not much, among the people [who] usually sing with us. Sometimes some of the best singers, like Dan, he would ask friends of his who [he knows] have a good voice. But most of the others were regulars of the choir. We just stand a little farther from the microphone if our voice is not so good. Almost everybody was welcome there.

LW: How will music advance Occupy’s mission?
AM: I think it advances Occupy’s missions because it’s very happy, and it gives hope as well. And we also use songs that are very stimulating. That’s all you need for activism: you need hope, and you need to have energy. So our songs are really selected for that. They question authority, and they force people to question some of things that are presented as truths. It’s right along the Occupy movement’s philosophy.

LW: What were your biggest inspirations in writing these songs?
AM: We didn’t write the music; we just wrote the lyrics. But I’m inspired by traditional songs that have repetition and the crowd has to repeat what was just sung. And that creates very interesting dynamics with the crowd: sing one sentence, they repeat it. It’s very stimulating for everybody.

LW: Speaking of crowds, does the choir plan to perform?
AM: We will perform at the launch of the CD. But probably we’ll perform in a few days after that. We haven’t decided a date yet, but on our Facebook page and soon at choraledupeuple.org, we have a calendar that we’re going to put there, and every time we go to a protest, it’s going to be on our calendar.

LW: What should the average listener take away from Quelques notes du Printemps érable?
AM: A sense that it’s possible to protest in a happy mood and probably reach other people’s minds as well. Communicate and have fun and get some hope! ■