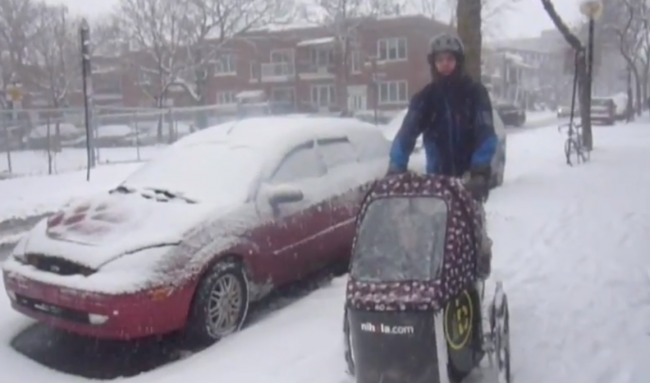 Okay, so maybe not everyone on a bike has super powers, but I can assure you that they do more than just break traffic laws and race past you while you cross peacefully on a green light. Cyclists play a huge role in creating healthier and more sustainable cities, and as we approach the New Year, we need to shift the conversation from “Where do cyclists belong?” to “What can we do to get more people on bikes?”

In the years to come, our city and its streets will become more crowded, and to presume that we are not able to do better than where we are now is a dangerous mindset that will ultimately lead to more congestion and a lower quality of life for everyone. The best thing we can do is encourage people who are motivated to find creative alternatives to cars to get on two wheels.

Businesses like Cycles Union are hard at work creating practical products that are helping everyday cyclists handle their comings and goings a little more easily and efficiently. Their motivation is a clear one: to make people more productive on their bikes. By creating their own tools, like carrying racks and bike trailers, they are not only helping our economy, but also helping our population become less dependent on fossil fuels.

Supporting the cycling economy means getting behind business owners who know their customers by their first names and want them to be safe no matter how they choose to get around town. There is an inherent lifestyle associated with cycling, and those who have dedicated their lives to bikes look not only to grow their businesses but also to share innovative and new ideas about city living.

Dumoulin Bicyclettes faced heavy criticism from TV host (and former politician) Mario Dumont after posting a video on YouTube explaining how to bike in the winter while towing a child. Despite the bad press, the cycling community rallied behind it, particularly on social media (#VeloMTL). Dumoulin then responded on its website and went head to head with Dumont on V Télé to dispute the disparaging and inaccurate remarks he and others made.

Dumoulin offers a large selection of folding bikes in the city, along with a huge variety of cycling lifestyle accessories for every season. It’s part of a growing network of people and businesses who are not only dedicated to getting more of us on bikes but also to fostering supportive and educational environments aimed at self-empowerment. In Montreal, we are fortunate enough to have nine bike co-operatives that have created safe and interactive learning spaces where you can bring your bike in and fix it free of charge. These places will also give you the know-how to fix things yourself in the future.

As we all know, Montreal is riddled with infrastructure problems, and although cyclists will surely not be the ones to solve them all, what they do offer is an environment that nurtures both creativity and ingenuity. There are people here who’ve dedicated a good part of their lives to promoting bikes — sure, as a way of dealing with pollution and sedentary lifestyles, but also of coming up with solutions that benefit the masses and fighting convention in the name of sustainability. ■

Cam Novak, a former bike courier and founder of Cycle-Bird Courier, is a long-time cycling advocate. He currently weighs in on Montreal’s cycling scene on Twitter and on his weekly radio show on CKUT 90.3 FM