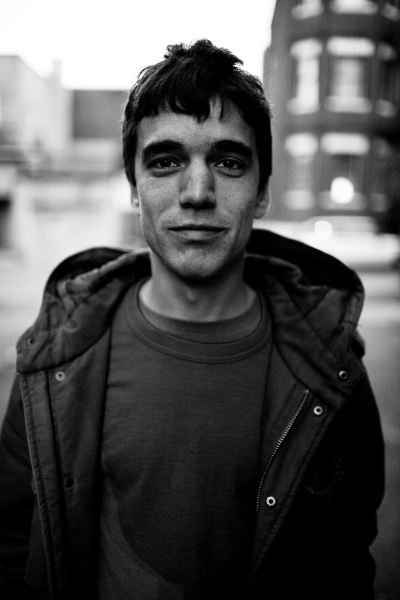 Although not a believer in this Friday’s Mayan apocalypse, local songwriter James Irwin is looking forward to the day nonetheless. Coinciding with his performance at the Passovah Holiday Special 2012, it’s also the somewhat arbitrary date he’s given himself to end one musical calendar and begin another. So it’s no wonder that when I called him at his at Mile End apartment, he was practising a cover of Sam Cooke’s “A Change Is Gonna Come.”

Irwin will be leaving behind Western Transport, his self-released, year-and-a-half-old solo debut that once existed as Blue Dust, by finally putting out a limited run of physical copies. He’s also got a backlog of tunes dating to his time with his old band, My People Sleeping, which he’ll make available as an EP at the Holiday Special.

So what does Year 1 A.P. (after Passovah) have in store for Irwin? The 31-year-old Orangeville, Ont. native is working on two albums: an energetic and cooperative one with his new band, the Moment, and another solo record, which he considers more of a headphone listen. “I picture people listening to it alone, and me conceiving of it alone,” he says. “It’s more of a personal interaction than an activity.”

I spoke to Irwin about the introspective Western Transport, double-dipping with the Moment and letting people in.

Erik Leijon: How do you feel about Western Transport these days, now that it’s been out for some time?
James Irwin: I feel like I’ve changed a lot since I made it. I’m working on other stuff now, and I’m trying to distance myself from the headspace that it came from, but I’m really proud of it. By the time I finished, I had spent three years working on it.

EL: What was that headspace?
JI: Very introspective. A lot of the themes were based on conflict that was going on in my life at the time, and there’s a lot of anger and dwelling. It has a haunted atmosphere to it, of isolation and guilt, and that headspace was good fodder for songs, but since then I’ve tried to immerse myself in more active things. I spend a lot of time writing and reflecting in my own head, and so I’ve made a conscious effort in the past year to spend more time in action, and in groups, playing my music more intuitively than in a calculated, individual way, which was how Western Transport was made.

EL: How did you attain that haunted atmosphere in the music?
JI: The reason why it took so long to finish and was specific in the way it sounded is I always thought about making the formal elements disappear as much as possible. I wanted to use sounds that swell and move in waves, that are indistinguishable from one thing to the next, so you don’t quite know what’s making the sound. It’s what I like on an aesthetic level, but it also suited the emotions. I had a strong sense of what the emotion was in each song because that was what they were created from, so I waited until the sounds felt right. There’s very few distinguishable melodies or riffs in the music; it’s ambient and meant to make you not too aware of the form. They’re folk songs, essentially, but I didn’t want to call attention to the genre. You can use recognizable forms and musical themes to give people a way in with a familiar element.

EL: Did you not want to give people a way in?
JI: One of the things I’m realizing now is I wasn’t making it easy for people, and I don’t know if that was really the case, but I am interested in communicating in a musical language that gives people a root in. I didn’t intend to not let people in, but I didn’t want the songs to be immediately identifiable or comparable. I wanted the emotions to be believable. Now I’m trying to compose all the elements at the same time, because for Western Transport I wrote all the songs solo, mostly on guitar, and in a lot of cases recorded them like that and then did a lot of overdubs.

EL: Who’s in the Moment?
JI: Myself, Nick Scribner, Adam Waito [of Adam & the Amethysts] on bass, Jeffrey Malecki on drums and Julia Lewandoski on keyboards.

EL: Are you working on an album?
JI: We’ve recorded all the bed tracks for an album, but there’s no telling how long it’s going to take. Hope to have it done by the spring; we recorded very quickly together as a group, but Nick and I have been working on overdubs. I don’t think anyone wants it to be something we’re sitting on too long. We want it to be good, but we don’t want it to be overworked, so I hope we have a few more intensive sessions and then have something ready for the spring.

EL: How does it compare to what you’re doing as James Irwin?
JI: The main thing is my stuff is conceived more for you to listen to by yourself, recorded music you have more of a personal relationship to, while the Moment is more about collective energy, about being fun to play in front of people, and for people to get into it. That’s something I didn’t get before, but there’s quite a big difference. We’re working on things as a group, so it’s about coming up with active parts for everyone to play. ■