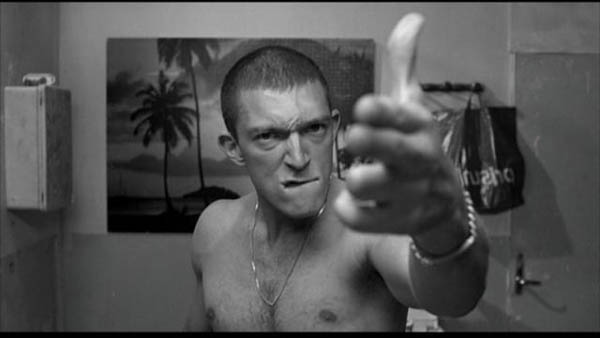 Framework is a year-long DIY film school; 52 films to expand your consciousness.

Montrealers are accustomed to the occasional uprising; it’s not uncommon to see hordes of protestors take to the city streets as a method of voicing a collective opinion. In this sense, Montrealers, far beyond any another Canadian population, will respond to and understand the tightly wound energy of Mathieu Kassovitz’s ticking time bomb of a film, La Haine.

It begins with a fight. Riots have taken place the previous night in the multicultural outskirts of Paris, and police have beaten Abel Ichacha into a coma. The misguided attack on Abel fuels the already intense fire within the ghetto, and becomes the catalyst for a community’s warzone revenge against the police.

Vinz (Vincent Cassel), Abel’s compatriot, sets a self-imposed ultimatum that calls for brazen action on the police if Abel dies. Having found a gun belonging to a police officer in the chaotic riot the night before, Vinz vows to shoot a cop on principle.

Setting the story over a 24-hour time span, Kassovitz draws us into the anarchy of the ghetto through Vinz’s impetuousness, and the desire of his friends, Hubert (Hubert Koundé) and Saïd (Saïd Taghmaoui), to contain his impulsive behaviour. What emerges is a furious film, whose tone escalates from resentment to frustration with an eventual and inevitable end in violence.

To adopt an American term, La Haine is an “inner city” film that takes place nowhere near a city. Released in 1995, it was the first of its kind to navigate through the ghetto lands that exist outside the invisible walls of bourgeois Paris, and its exploration of oppression, delinquency and social deprivation established a genre that would come to be known as the banlieue (suburb) film.

Despite its critical acclaim, the recognition of Kassovitz as Best Director at Cannes and its three César awards, upon its release La Haine was met with much controversy as it was declared to be “un-French.” Its focus on discrimination and racism in place of a holistic vision of Paris underlined the great differences that were beginning to divide the region.

What will resonate most is the comparison to similar tragedies that have happened on our own soil. With all that Montrealers know about rebellion, the energy of La Haine might still overwhelm or be too intense to bear, but its power will make you feel, and that is true cinema. ■

La Haine is available to rent at Boîte Noire and Le Septième in the east and Avenue Video in the west. It is also available on iTunes.