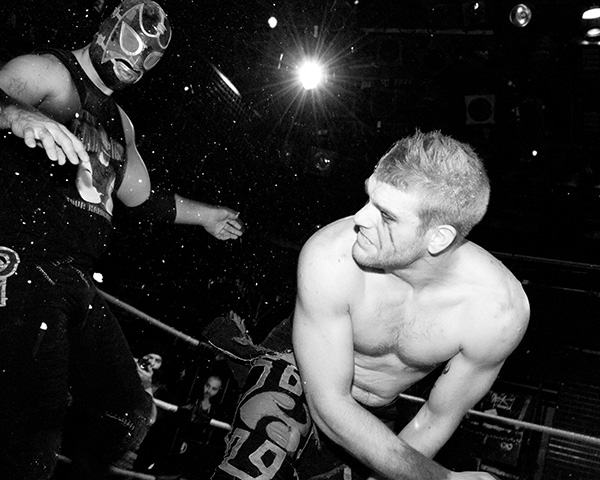 Stepping up for amateur-hour battle. Photos by Brittany Lackey

That’s the main reason many come to watch independent wrestling events: the chance to see some blood spilled on the mat. Many will deny it, of course, but deep down the primal instinct to see a bunch of sweaty people try to cut each other open is of paramount importance. People come to these shows knowing that unlike professional wrestlers, many of the grapplers in the ring are of wildly different calibres and athletic backgrounds. It’s the attraction of the amateur. The crowd hopes to see people fuck up. As much as they applaud the athletic men and women in between the ropes, they also want to see them fail miserably. They want to hear the crack of broken bones, the sight of blood, the dizzied stumbling.

And so it was. There, at Foufounes Électriques last Sunday night, between sips of Molson Dry, men spoke of crimson splashed across the mat and of ill-executed moves that produce horrific results. It was Battlewar VI: The Quest For Peace (subtitle mine).

Professional wrestling, the much-maligned snotty stepbrother of proper fistic arts, attracts a wide range of weirdos. I’m talking mutant-level freakiness — people who buy wholeheartedly into the characters created onstage, who invest too much of themselves into the concept. Those who can’t help but cheer for everything.

There’s a smart-alecky subset of fan who will chant anything at any time; they taunted anglo wrestlers with “LOI 101.” Their ridicule bounced off the walls Sunday night.

To be quite honest, this indie event was of a higher calibre than I’m used to. Most homegrown federations offer ramshackle rings, homemade merch and shitty storylines played out by people who can’t even use a microphone, pitching the crowd in distortion. They’re held in church basements, community centres and other out-of-the-way places. Fans of all stripes show up in droves, and wrestlers offer the chance to have a Polaroid shot with them in the ring for a dollar each. 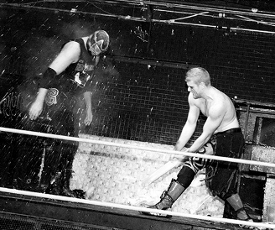 Some years ago, I met a woman of no fewer than 70 years at a Fédération de lutte Québécoise event. She perched herself at the front of the ring, taunting wrestlers young enough to be her offspring’s offspring all evening. But, if the action moved out of the ring close to her, she would peace the fuck out, hurling obscenities from the back of the venue.
That’s somebody’s grandmother. But such is the strangeness that attracts people to wrestling. The concept’s a level above carnie, yet still resides in the province of the freaky.

The first half of the Battlewar VI: Xmas For The Lonely (subtitle still mine) card offered up much in the way of theatrics and was light on actual wrasslin’. The first bout was a six-man tag team match that relied on the gimmick of a cartwheel contest in order to make it interesting. Franky The Mobster was the obvious draw. The second match saw two contestants battle it out for the chance to call themselves “The Sexiest,” and though it was originally meant as a showcase for ex-International Wrestling Syndicate mainstay Sexxxy Eddy and Leon Saver, Eddy’s no-show forced a change in the card.

The third sideshow of the evening brought Quebec-bred porn star Vandal Vyxen and schlub-with-a-mask Giant Tiger to the ring. Then Vyxen proceeded to make out with a female plant nearby. Elsewhere, Tiger’s opponent Vanessa Kraven handily defeated him, and afterward, local comedian Mike Paterson appeared dressed as a hip dad from a John Hughes movie — visor sunglasses and sweater draped across his shoulders — and tried to engage the crowd in bad dancing.
If you’d told me at the outset of Battlewar VI: Fuck Other Holidays (still me) that I’d be watching Mike Paterson and Vandal Vyxen dancing around in a ring while bad ’80s cock rock renditions of Christmas carols blasted through the speakers, I would have called you a dirty, weird liar and probably tried to fight you in the ring during halftime.

The mouth-breathers around me lip-synced along to the Ozzy, Van Halen, Metallica and Crüe being piped through the sound system. Was I one of them?

Battlewar VI: Foufs On A Sunday!?! posterboy El Generico wrestled an exciting match with Shane Hawk, El Generico’s alleged protégé. They broke kayfabe while holding each other at the end of the match; the luchador of questionable ancestry held up his hand up in victory, obviously proud of his wrestling baby. Really, quite sweet.

The card was headlined by indie fav Green Phantom, taking on challenger Dirty Buxx Belmar in an annual IWS tradition carried over into newer federation Battlewar: the Hardcore Christmas Match — otherwise known as my three favourite words to ever be strung together. Images of tinsel slicing one of the opponents open danced through my mind — dangling candy canes with sharp edges being driven into each fighter, cutting them open.

What ensued, however, was a disappointingly blood-free but highly exciting hardcore match. 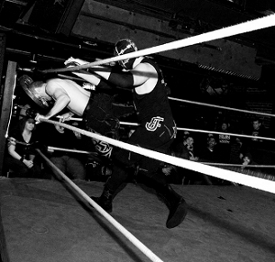 I had been consumed by the bloodlust myself by the time the top bout of the card came around. I joined in with the gathered hundreds, demanding that the wrestlers use the decoration-cum-weapon Christmas tree near the stage. Neon lights were broken on backs. A chair was saw some action before it was discarded. Baking trays, cookie tins and other kitchen accessories were put to work. Nothing in the proverbial pantry was sacred anymore.

The holy-shit moment of the evening came when Belmar ran up to the second floor of the venue, having placed the Green Phantom on a table; any wrestling fan knows what happens next. Belmar gave Phantom the drop and snapped the table in half.

I felt my pulse quicken. My cheeks were flushed. I joined in a rousing chant: “CHRISTMAS SPIRIT.” The Christmas tree was finally used by Phantom to end the whole damn thing. The bell rung. We all rose and shuffled out in silence, as if we had witnessed some sort of unholy Sunday black mass. Cigarettes were lit as patrons stood on the wet smoking area at the front of the venue. And we all lived to see another night of thrilling madness. ■