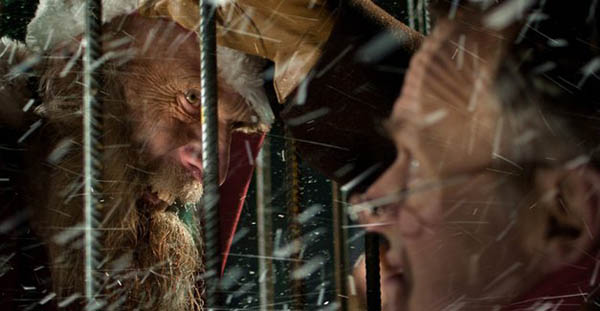 At home in front of the tube, but looking for an alternative to It’s a Wonderful Life, The Charlie Brown Christmas or Elf? Cult’s editorial board present our personal choices for alternative holiday viewing.

Lorraine Carpenter
Bad Santa
In what I like to think of as a sequel to Bad Lieutenant, Billy Bob Thornton oozes sleaze as a degenerate seasonal Santa who works different towns every year, robbing the department stores that employ him. But as hilariously debauched and grotesque as Thornton’s alcoholic anal-enthusiast is, he’s not even the main attraction. It’s the supporting cast, including his elf/thief sidekick Tony Cox (insult-comedy gold), prissy, prudish mall manager John Ritter, corrupt security chief Bernie Mac, pathetic fat kid/barnacle Brett Kelly and, the star of what might be the movie’s best scene, Ajay Naidu as a closeted Santa fetishist. This has got to be foulest, nastiest Xmas movie Hollywood has ever produced. Note that the unedited DVD edition, Badder Santa, is the one you need to watch.

Malcolm Fraser
Gremlins
This 1984 creature feature has a lot of things going for it. The story itself, about a species of mysterious cute critters that can turn into nasty reptilian killers, is a great sci-fi/horror concept and paranoid parable. The holiday content is inherent: Gizmo, the original creature, is a Christmas gift to a teenage boy (Zach Galligan), bought by his father (country crooner Hoyt Axton) from an Asian bodega owner (Keye Luke, of the original Charlie Chan series — how about that casting?!). But a mid-film revelation from Galligan’s girlfriend (’80s babe Phoebe Cates) about a childhood Christmas trauma adds an extra note of darkness. All in all, it’s the single nastiest thing that writer Chris Columbus (Home Alone, Mrs. Doubtfire, etc) or executive producer Steven Spielberg have ever been involved with, by a long shot, and a compelling argument for director Joe Dante’s outsider auteur status.

Brenden Fletcher
Rare Exports: A Christmas Tale
This 2010 Finnish import might be the best thing to happen to holiday films since Peter Billingsley shot his eye out with a Red Ryder BB gun. Crafted in the spirit of evergreen 80s favourites The Goonies and Gremlins, the film follows the spirited and darkly comedic quest of young Pietari (Onni Tommila) to save his village from a devilish creature, freshly unearthed from centuries of frozen slumber in the mountains above and bearing a striking resemblance to a certain white-bearded, red-suited delivery man we all know and love. Packed with endless scenes of child endangerment, kidnapping, torture, paganism and more naked old man penis than you’re likely to see in all of 2013 (unless you’re doing something very wrong), Rare Exports is truly a rare treat.

Tracey Lindeman
C.R.A.Z.Y
It may not be a conventional Christmas movie — there’s no Santa, no elves, no magical Christmas spirit — but Jean-Marc Vallée’s C.R.A.Z.Y has all the fixings to become a yuletide classic (including the fact that it now routinely plays on French-language TV at this time of year). The quirky and emotional 2005 Québécois film is steeped in 1960s and ’70s Montreal nostalgia, during main character Zach’s coming of age in a deeply traditional Quebec family.

Though it’s not centred on Christmas, the film spans a number of them as a demarcation of the passage of time — Dec. 25 is also Zach’s birthday. Many Christmases are spent around the family table in a familiar, thick cloud of cigarette smoke and drunkenness, and each is punctuated by Zach’s father’s rousing rendition of Charles Aznavour’s “Emmenez-moi.” From a Christmas midnight mass with hallucinogenic properties to an all-out yuletide brawl, C.R.A.Z.Y speaks to Quebec holiday traditions like no other.

Emily Raine
The Ice Storm
Yep, that’s right. I’m a Grinch. While Ang Lee’s 1997 drama takes place during the holiday season, few would argue that it’s a Christmas movie in the strictest sense. The film eschews gummy emotional pleas for festivity and community spirit in favour of a dark meditation on two privileged families whose lives are spinning out of control. Lee’s all-star dream-team cast of characters experiment with sexual deviance, over-indulge in drugs and alcohol, and refuse to see how messed up they all are until a vicious storm descends on their ’70s suburban neighbourhood, forcing their problems into the light in the wake of spectacular tragedy. Merry Christmas!

Lucas Wisenthal
The Hebrew Hammer
The best part of The Hebrew Hammer, Jonathan Kesselman’s 2003 Jewsploitation film, is its opening sequence. As the credits roll, the titular character (Adam Goldberg), bedecked in pimped-out Hasidic garb, moves like a man on a holy mission through a Jewish neighbourhood in Brooklyn, greeting his many admirers and scaring off their tormentors along the way. A Jewish-tinged parody of — what else? — Isaac Hayes’s theme from Shaft plays on the soundtrack: “He’s a complicated Jew, and no one understands him but his mother.” Hammer then saves Hanukkah from Andy Dick’s anti-Semitic Santa Claus. Somehow, a sequel is apparently in the works. ■