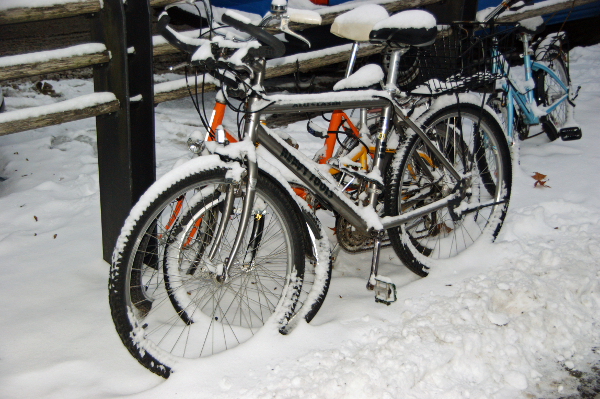 Contrary to popular opinion, winter cycling — even on Montreal’s icy roads — is not a suicide mission. It’s intense, yes, but far from impossible.

Myths about winter cycling abound. People seem to think you’ll either slip under the wheels of a car or get hypothermia, but the fact is, it’s just biking. Having cycled year-round for almost a decade, I can tell you the roads are better maintained than the sidewalks and that the constant movement keeps your body sufficiently warm.

Winter cycling is, at the very least, an alternative to months of cramped metro rides filled with screaming babies and people doused in heavy cologne. Although it may seem risky at first, given this city’s track record, I’m more worried about getting run over by a sidewalk plow than getting injured on my bike this winter.

You’re not going to die
I’m not about to say that you’re not vulnerable out there; however, vulnerability is something cyclists deal with regardless of season. When the snow hits, the game changes from potholes and jaywalkers to ice patches and plows; there are fewer people on the streets, and drivers have no choice but to ease their foot off the gas and be more alert. But winter elements are predictable, so take corners slowly and avoid sudden turns. There’s a higher risk of accident if motorists don’t see you, so keep away from the sides of the road and take your place where the cars have driven and compressed the snow.

Riding knobby
Although some bikes are better than others at maneuvering on slippery streets, year after year, I’ve seen people prove that any set-up can handle the elements. An easy way to winterize your bike is to slap on a pair of tires that have knobs or bumps on them and to install a front and rear fender to prevent splash-up. If budget permits, the best thing you can do is modify your rear wheel to either a single-speed or fixed-gear set up. You’ll have less to maintain, and you’ll quickly realize that, regardless of how many gears you have, winter weather will only allow you to go so fast.

Don’t sweat it
The last thing you want to do is arrive at a social event smelling like a wet dog or sweaty gym sock — but luckily, you don’t have to. The most common mistake people make is over-insulating and wearing the wrong types of fabric. Cotton is the devil. It will not keep you warm and will stink with the slightest hint of sweat. Switching your socks and sweater to wool will not only stop odor and reduce sweat build-up, but will also keep you much warmer. Jackets with armpit zippers are a lifesaver and will let air circulate to your skin — that means less sweat and less stink. ■