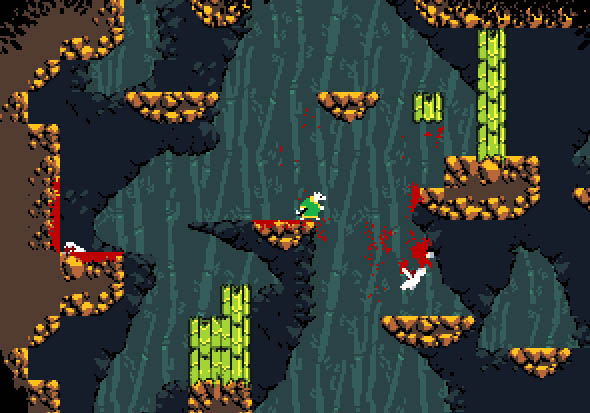 Teknopants’ Samurai Gunn, a featured game at this year’s Prince of Arcade

These days, video arcades are either long gone or far from what they used to be. The onetime social convention is now reduced to displaying major mainstream titles for profit, without giving new experimental or independent games any chance. Luckily for us, some people still have that spirit of bringing people together with the same eagerness for video games as well as giving new talent in the industry a fair chance to be discovered. Enter The Prince of Arcade, a yearly event that celebrates indie games, arcade-style, right here in Montreal.

“This is a celebration of the independent gaming scene and a crazy arcade party,” says Prince of Arcade co-founder Nick Rudzicz. “We wanna tie in the memories of the arcades with refreshing work being done today, and we want people to discover it.”

“There’s a lot of interesting work done out there, and while Halo or Street Fighter tournaments and perfectly valid forms of entertainment, we also want to show other fascinating indie games that people otherwise wouldn’t have known about,” says Rudzicz.

The Prince of Arcade has been trying to keep a sense of tradition by bringing the Montreal gaming community together at one big event to fill a void in today’s gaming scene. By including existing indie game developers along with introducing new ones to the public, the guys at MRGS want to pull in new talent, make the creators known for their remarkable work and experiment with the new types of interactive experiences that their games bring.

“The Eastern Bloc is going to be filled with projectors displaying the games on big walls, so people can just walk up, grab a controller and play new indie titles,” along with “some locally-made arcade cabinets and a proper functioning full-on bar,” says Rudzicz. “It’ll be an event to socialize about games, have fun and show people all the fantastic new stuff that indie devs worked on.”

The Prince of Arcade will be held Tuesday, Nov. 13 at the Eastern Bloc (7240 Clark), 8 p.m.-1 a.m. Entry cost is 9$ and alcohol is at your own expense by purchasing tickets at the entrance. More info here.