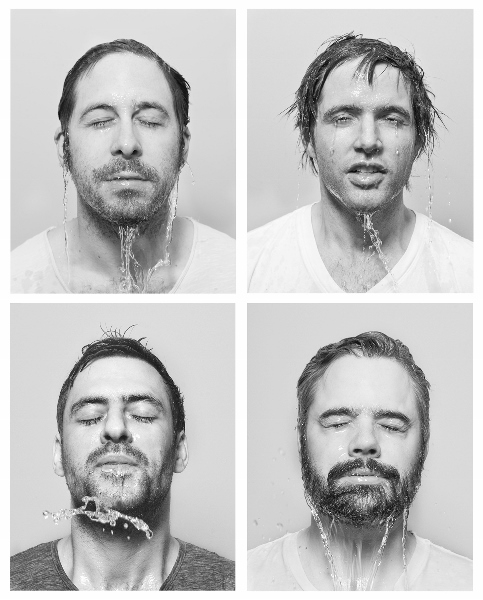 “I just love vinyl,” says Toby Cayouette, frontman for Montreal’s Statue Park. The band’s new single, “Shackleton,” is coming out on seven-inch, and despite Cayouette’s fondness for wax, he’s less than enamoured with the Brooklyn pressing plant where his order has been held up. The records will most likely arrive in time for tomorrow night’s launch party, but it’ll be a squeaker.

lf you’re not familiar with Statue Park, it might be because lately, aside from the occasional show, they’ve been out of the public eye. The band formed in 2003 and was more active in the mid-aughts, before Cayouette joined local francophone band Chinatown. The rest of the current line-up (Jon Hill, Mathieu Dumontier and Michel Aubinais) are equally involved in other projects, but despite coming on board as Statue Park 2.0, they’re not hired hands, but equal contributors to the music and arrangements. Cayouette handles the words.

You may also know Cayouette as DJ Parklife, founder of Mod Club Saturdays at Blizzarts. If you caught the Britpop reference there, it’s one that’s relevant to Statue Park’s current sound — their aesthetic was more electro-pop in the beginning, but now, though you won’t detect any anglophilia or actual thievery from the big British bands of the ’90s, Cayouette’s vocal style and melodic tendencies will strike a familiar chord to fans of that U.K. sensibility.

The new songs (including the B-side “Letter Before Leaving”) are available digitally, and “Shackleton” is also viewable. The impressive music video, shot in several very recognizable locations around town, depicts a day in the life of a broken-up or otherwise disconnected couple, haunted by an alternate reality in which they’re together and happy. It was conceived and directed by Statue Park’s photographer Rodolfo Moraga. “We were both coming out of big, devastating, terrible breakups at the time, and the pathos behind [the concept] was matched perfectly,” Cayouette explains.

Although it doesn’t show, the video was a no-budget DIY affair, and given the complexity of its literal duality (the estranged couple with projections of their alternate life in the background), it took four days to shoot. Luckily, the team’s enthusiasm made up for the lack of resources and monetary reward.

“We had a good DOP who was pretty much a stunt guy. He did stuff that I found extremely dangerous, but he was up for it, like rollerblading backwards down the Jacques Cartier Bridge to shoot us on our bicycles. If you were to shoot a scene like that legally, you’d have to block the bridge and get cops and insurance and cranes — what a nightmare. But no, we had a dude on rollerblades going backwards down the bridge.”

The next time Statue Park makes a video and places an order for vinyl, it’ll be in conjunction with the long-awaited release of an LP.

“Right now, we’re still shopping around for a label for the record, which is mixed. It’s done; I love it. We don’t know who we’re going to put it out with, but I didn’t really wanna wait a year, sitting on this record, without releasing some of the music. I wanted Statue Park to become part of the music sphere again and have something out there that people are talking about and listening to, and it’s very hard to do without a record. But I didn’t wanna let the cat out of the bag too much; I didn’t wanna self-release the [LP], because I think it deserves a wider release.”

Until then, check out “Shackleton,” the video and the single.

With Montag at Il Motore on Thursday, Nov. 8, 9 p.m. A Cult MTL co-presentation.