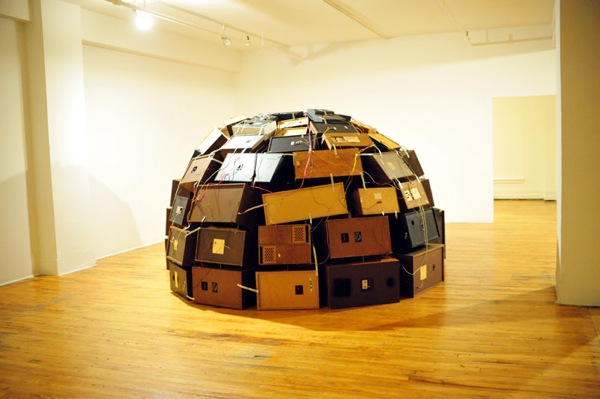 Alexis O’Hara has long been a staple of the local art and performance scene, hosting a cabaret here, touring an art exhibit through exotic Euro locales there. But O’Hara’s latest installation, returning to Montreal after a lengthy tour abroad, lets you take centre stage. Squeeeeque!: The Improbable Igloo is an immersive sonic space, constructed in the shape of an igloo out of some 60 or 70 speakers, recycled from Ecocentres or found along Montreal’s generous garbage day sidewalks.

“It’s a project that I proposed as a performance space for strangers to get involved in collaborative song,” she explains. “I’ve wired about 34 of the speakers, and when people go into the igloo, there are microphones hanging from the ceiling, and they can grab the mic and talk into it and the voices go through a delay and a phaser and then coming out of the walls of the speakerbox igloo.”

O’Hara first installed the igloo at Skol for just three days as part of Elektra in 2009, and the structure has since toured Europe and made a brief stop-off at Osheaga. In its present iteration, Elektra and the Conseil des arts de Montréal are working together to bring the igloo on tour through the local Maisons de la Culture, exhibiting in Maisonneuve, Ahuntsic, NDG and Point-aux-Trembles.

“This one’s kind of next-level because it has one of those porticos, like a real igloo. It’s the first one that has that,” O’Hara explains. “As well, I’ve installed a light organ into a couple of the speakers, so it lights up sound-reactive LEDs that correspond to the high, low and mid-frequencies.”

O’Hara created the igloo almost entirely from recycled or junked materials, noting that “People will throw out the most amazing things.” While the installation will be set up in various neighbourhoods around town over the next few months, she adds that, “The bonus of coming to the vernissage is that they can also hit up the Value Village, which is right across the street.” ■