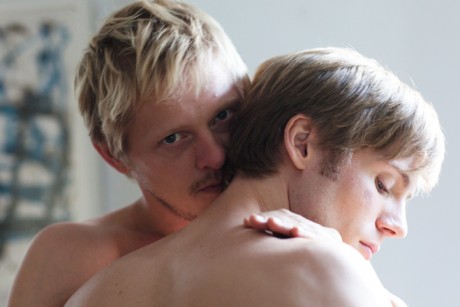 Keep the Lights On

The Image+Nation Festival, celebrating films by and about the LGBT community from around the globe, turns 25 this year. The fest celebrates this quarter-centennial mark with a solid program spanning nations and genres.

Starting off with a stacked deck, the festival has no fewer than three opening night films. Ira Sachs’ Keep the Lights On is a drama about a decade-long relationship between two men, one of whom is closeted, promising dramatic depth as well as copious hot man-on-man action. Dee Rees’ Pariah, an African-American lesbian coming-of-age story co-produced by Spike Lee, was a hit on the festival circuit last year, but can be added to the list of “films that were inexplicably never released in Montreal,” so catch this chance to see it on the big screen.

International queerdom is on the radar of the fest, both in documentaries such as Yariv Mozer’s The Invisible Men, a portrait of queer Palestinians, and dramas like Negar Azarbayjani’s Facing Mirrors, notable as the first Iranian film to address transgender issues. Closer to home, the intriguing La face cachée des bars de danseurs nus de Montréal tells the history of gay strip clubs in our fair city.

Virginie Despentes made a huge noise with her violent 2000 road trip movie Baise-Moi; she returns to the screen for the first time since with Bye Bye Blondie, a comparatively gentler but romantically intense story, starring Émanuelle Béart and Béatrice Dalle as two women who rekindle their high school romance in middle age. Oliver Hermanus’ Beauty, a prize-winner at Cannes, portrays a self-loathing closet case who falls for a younger man.

The fest wraps up on Sunday, Dec. 2 with Joshua Tree, 1951: A Portrait of James Dean, a reimagining of the iconic film star. In between, there are tons more dramas and docs along with three programs of shorts, the self-explanatory Lesbomundo, Homomundo and Queerment Québec. All in all, it’s a most happy 25th for the fest and a strong slate of programming no matter what your orientation. ■