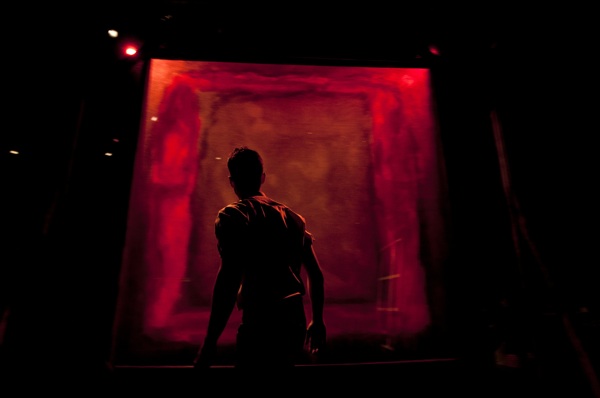 American abstract expressionist Mark Rothko’s paintings now command some of the highest prices on the art market ($86.9 million!). His canvases feature hazy blocks of color that capture all human experience for some, while others skeptically complain, “My three-year-old could paint that.”

Rothko’s art evokes polarized responses, but so too does the man. Rothko was known as a dedicated and philosophical visionary, as well as a vainglorious grouch. John Logan’s multiple award-winning script Red addresses a historical mystery about Rothko’s ultimate reaction to his commission painting murals for the Four Seasons restaurant, a culinary temple frequented by New York’s über-rich. Red’s Rothko is unwilling to sell out his vision and intends to paint “appetite killers.” However, the arrival of Ken, a new assistant who is himself an aspiring artist, prompts Rothko to rethink the commission altogether and, in doing so, acknowledge his impending obsolescence.

The play drips with juicy dialogue. Rothko (Randy Hughson) commands the stage, an egoistical colossus inspired by Nietzsche, at the peak of his fame, facing off against an insipid, giddy future celebrating the mundane (soup cans) and mass production. Every word from Rothko’s mouth is a treatise, whether he addresses Picasso, Jung or roast suckling pig. Ken (Jesse Aaron Dwyre), eager to impress his new master, arrives as a wide-eyed blank slate, but quickly proves himself an apt pupil. He transitions from naïf to parrot to freethinker under Rothko’s dominance. Given the scintillating dialogue and the depth of the subject matter, it’s no surprise that the Broadway production picked up multiple Tony awards, including Best Play and Best Actor.

The Segal Centre’s production, directed by Martha Henry, is understated. The characters are played with restraint, rather than flamboyance. Rothko appropriately comes across as self-absorbed, furious and driven, but he needs more grandeur to give his wisdom and self-assurance nuance. Character traits, such as how he smokes cigarettes, seem like an artifice rather than embodied habits.

Puppy-doggish Ken is also played with the actor’s cards kept close to his chest. His admiration and desire to be of service are evident, but it’s only when Rothko accuses him of being “needy” that Ken’s desperation for approval emerges. The momentum of the play requires more, not less, from these gifted actors, although of course there’s a very fine line between under- and overstatement. It would be extremely easy to over-compensate and turn them into exaggerated caricatures.

The sets convey the atmosphere of the artist’s studio, with its massive, rolling canvases and an assemblage of period furniture. Battles to control the record player add to the ambiance. However, over the course of the production, there is no suggestion of time’s passage. Only when Ken states that he has been working for Rothko for two years does it become clear how much time has passed. Other small details, like Rothko pulling out a full bottle of whiskey or the lack of butts in the ashtray (Rothko was a heavy smoker and drinker) seem like oversights that snap the audience out of the dream.

All in all, the play successfully addresses the parallels between Rothko and the fate of his works. Purchased in galleries and auction houses by museums and people with deep pockets, Rothko’s paintings are stripped of their carefully controlled environments, transformed into the very thing Rothko despised: “over-mantles” that match the sofa.

Red sets Rothko before an audience as an angry, fading star, whose enormous ego is balanced out primarily by a commitment to his vision on the meaning and purpose of art. References to his historical framework and philosophy justify and elevate the artist, contextualizing his anger and conceit. However, the Segal’s production (seen in preview) is underwhelming, given so much great material to work with and the success of the original. Small details require greater attention. ■