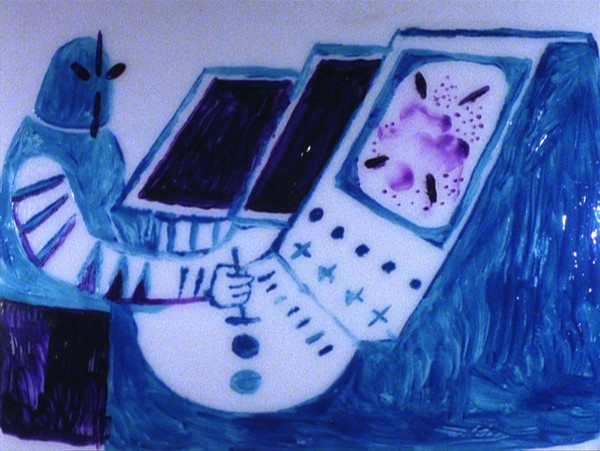 Still from “Life Under the Three Suns,” by Leif Goldberg

Gearing up for their fifth anniversary celebration next weekend, the Drawn & Quarterly Bookstore is hosting an evening of short experimental film screenings by artists including Leif Goldberg, Julie Doucet, Leyla Majeri, Joshua Bastien and Jason Kadman. Majeri, the event’s organizer, explains that the event is largely “an excuse to bring Leif Goldberg’s films here.”

“A lot of people associate Leif with this community of artists that lived and worked in this space called Fort Thunder in Providence,” says Majeri. “I did a tour of the East Coast in the early 2000s, and I think there was a Fort Thunder poster in every house along the way until Atlanta.”

“There were no boundaries between different media. People were doing [everything from] screen-printing [to] theatre,” enthuses Majeri’s collaborator, musician Katherine Kline. “From an outside view, it seemed really collaborative and cross-genre. There was just, like, an energy. It was very ground-breaking, but also very playful.”

Out of Fort Thunder came two major contributions to the illustrated cartoon world: Paper Rad and Paper Rodeo. “There were probably 10 or 15 artists who were a major influence for Paper Rad,” says Kline, describing the group’s output, which is like seeing your favourite video game characters on a Technicolor acid trip. “Paper Rad is really colourful and psychedelic. They were kind of pushing boundaries.”

Whereas Paper Rad was a movement or style, Paper Rodeo was an actual comic journal itself. As Kline put it, “It was a free screen-printed paper that was covered, every inch, with [the work of] many different artists. They were all different, but very intense. They were far-out comics. They were a little more free than classic comics.”

Why animation?
Zodiacal Light is Majeri and Kline’s contribution to the evening’s lineup. Asked about inspiration for the film, Majeri told me that both she and Kline had separately attended a 10-day Vipassana meditation retreat. Anyone who goes on one of these retreats seems to come back with some kind of revelatory new perspective on life, and she was no different.

“I started to eat well, eat according to season, gardening bio-dynamically, which relates to the moon phases and the planets. I started to feel time frame-by-frame. I really came back to animation with all the ideas of movement, time, planets, and cycles.”

Zodiacal Light features shapes silk-screened onto film, accompanied by live sounds made by Kline’s manipulations of the film projector: “I’m basically playing synth, tape and optical sound. Leyla printed on the sound strip of the 16mm film,” she says. “When the projector is running during a performance, I take the audio output from the projector and run it through my synth. Using the synth, I can modulate the sounds as the film runs. I’m also simultaneously playing around with some stuff I’ve already composed on the synthesizer to accompany the rhythm of the film’s sound strip.”

Most of the artists featured in the show are primarily graphic or visual artists experimenting with film. Montreal-based cartoonist Julie Doucet is one example.

“Drawn & Quarterly probably exists because of Julie Doucet,” Majeri speculates. “She was probably the first female artist in Montreal doing comics. She’s kind of a symbol for women making comics, but she got sick of doing comics. She said it’s a man’s world. So she’s been experimenting with different media, including film.”

Maybe you missed the boat on the Fort Thunder movement, or have only dipped but a toe into the world of graphic novels, cartoons, and illustrations. If so, this event seems like a great opportunity to share in the genuine mutual admiration of a group of talented artists. Word is there will be country wine and popcorn. Sounds like a winning combination for a chilly autumn evening. ■