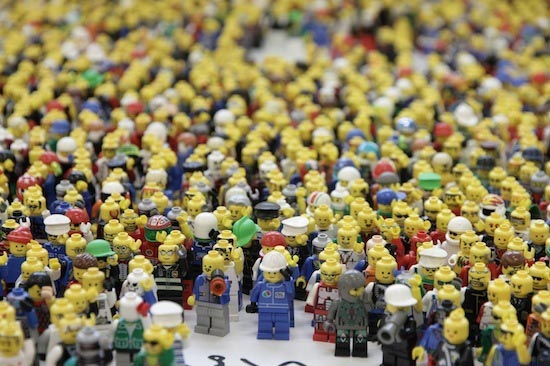 memory of an elephant, by Sayeh Sarfaraz.

Sayeh Sarfaraz presents her Lego version of dictatorship this month. Since 2009, the Iranian-born Montreal artist has devoted her body of work to denouncing the Islamic regime in her homeland. Her installation, memory of an elephant, is a sprawling maquette populated by miniature Lego people and inscribed with diagrams, drawings and definitions. Tiny crowds with raised fists, hand-crafted stone walls, chicken wire prisons and Von Trier-style floor maps all take part in her miniature worlds, and they often take over large portions of the gallery floor and wall space.

“It’s a kind of cartography,” Sarfaraz says. “It’s how I position myself in relation to everything that happened around me, and how, as an Iranian woman living abroad, I can understand the context in which I live.”

Her title is a nod to the old adage “an elephant never forgets,” but it’s intended in regards to the collective memory of the Iranian people. Since Iran’s Green Revolution in 2009, there have been several other popular uprisings in North Africa and the Middle East, yet its struggle against the fraudulently elected Ahmadinejad remains ongoing.

Sarfaraz works within a legacy of Persian miniature painting, a type of Iranian art that was most popular from the 13th to the 15th century. It evolved into many different styles but was known primarily for its small, bright, colourful scenes painted to illustrate literature and make its reading more pleasurable. Sarfaraz updates Persian miniature by using a more contemporary visual language. The bright colors of small plastic toys with movable parts in her elaborate constructions illustrate the ills of dictatorship and repressive regimes.

“Why toys? Because for me it’s something that has the power to invent repeatedly: you can take them away, recreate another story with them, recreate something different,” she explains. “And I also find that it’s a sort of tool for me that helps me express myself.”

Because toys make everyone think of childhood, Sarfaraz can use the playfulness of this association as an opening to address a very serious topic. In this way, just as Persian miniatures were sometimes used to make reading a more enjoyable experience, the Lego makes a heavy subject more accessible.

Sarfaraz has many friends who were jailed during the elections and the Green Revolution that followed. If her work was shown in Iran today, she would be put in prison too. With memory of an elephant, Sarfaraz brings dictatorship to the forefronts of our minds.