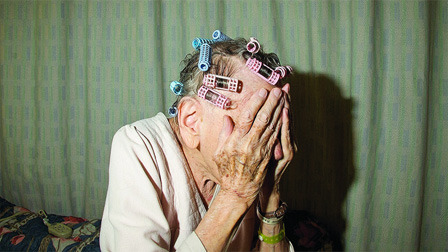 The Patron Saints
There have been countless documentaries about elder care facilities, but none quite as grotesquely human as Brian M. Cassidy and Melanie Shatzky’s The Patron Saints, an unflinching, unsentimental look at the patients of an unidentified home for the elderly and disabled. Taking a page from direct cinema, the film offers a look into the lives of these individuals without judgement — or framing of any sort, other than a periodic narration by the youngest patient, a bed-ridden middle-aged man who chuckles through most of his descriptions of his fellow patients.

Although not entirely devoid of laughs (there’s at least one scene with a dorky mustachioed gentleman caterwauling his way through Lionel Richie’s Hello to a dispassionate crowd) , The Patron Saints is a pretty sobering look at the banal-yet-terrifying world of nursing homes. Those looking for impish seniors doling out pearls of wisdom need not apply. ■