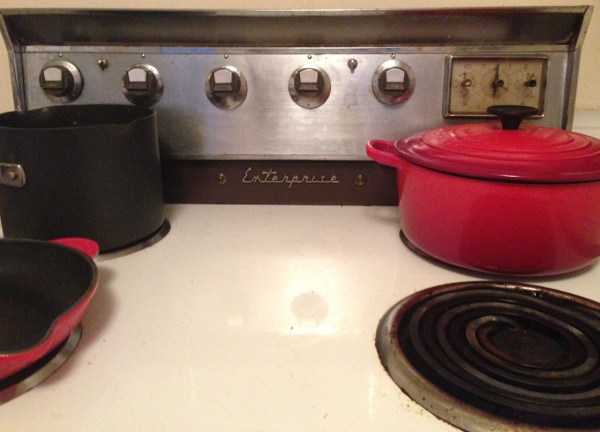 Teens in Pointe St-Charles are learning the ins and outs of the kitchen.

For the past few years, the YMCA in Pointe St-Charles has been pairing teens from a social housing complex with those from a rehabilitation centre for adolescents with mental disabilities and developmental problems — and the results have been delicious.

Every second Wednesday night during the school year, eight to 10 teens meet at a kitchen in the social housing complex behind the YMCA to cook simple soups, sandwiches, meat, fish and pasta, after which they receive a write-up of the instructions to put in their recipe binders.

To former teen program coordinator Cory Binning, teaching teens to cook basic meals is just as important as giving them a safe place to go after school.

The program started when the Centre de réadaptation en déficience intellectuelle et en troubles envahissants du développement approached the YMCA to start a cooking project. They wanted to pair the YMCA teens with high-functioning teens with special needs, explains Binning. “They’re all verbal, and their motor skills are developed. They’re kids who would likely have a chance to live on their own or with assisted living.” This year, the YMCA is pairing up with Regroupement pour la Trisomie 21.

To Binning, the program is also about creating needed social skills for the special needs kids. “There’s an element of cooking, but there’s also a bond that has been created between the teens,” he says. “The teens from the Y rave about how the special-needs kids have come out of their shells.”

In addition to specialized training, the participants from the YMCA’s after-school Teen Zone and from low-income housing also receive volunteer hours, references and a full stomach for their efforts.

Current YMCA youth worker Mark Bonneville has been helping with the program for years, doing everything from washing dishes and planning menus to entertaining the teens. “We’re on a good path. There aren’t a lot of community organizations like us that offer such a program,” he says.

The program isn’t without its bumps, however: it can only accommodate up to 10 teens, and its budget is limited.

“The interaction and social skills aspects wouldn’t work with a large group,” says Binning. “The special needs kids would get lost in the fold. We really want a pairing up of our teens. And if we had to pick up ingredients for a group of 20–30 kids, we’d only be able to do it once every couple months because of budget.”

Most of the program funding comes from the YMCA’s Strong Kids Campaign and from Centraide, but he says that some extra cooking oil, spices and one or two new committed volunteers — either passionate home cooks or local chefs to help with menu planning and cooking — would be a great help. They hope to start the program up again in mid-November.

Giving teens a place to go in the Pointe
But that’s not the only initiative encouraging adolescents to take to the kitchen. For $20 a year, teens can belong to the Pointe Ste-Charles YMCA Teen Zone, which also invites teens to make a mess in in the kitchen; usually 35–40 kids show up. But unlike the collaborative cooking program, it’s more about filling a need, says Binning.

“Sometimes it’s just to feed the kids,” he says. “Some of them don’t go home for supper, or haven’t eaten lunch, or, for socioeconomic reasons, they’re not eating as much as they should.”

The membership fee helps fund their activities, but unless they come on a regular basis and want to be part of a team or a regular program, the $20 isn’t essential, says Binning.

“We’re not going to force the money out of you, because the alternative is that you’re probably going to be on the street. So at the very least, you have to fill out a registration form so we have that contact information in case of emergencies.”

The menu options still aren’t the healthiest, but youth worker Bonneville hopes to shift the focus to more healthy eating and teaching basic cooking skills. Other plans include bringing in volunteer chefs and taking the teens on cooking field trips.

“I created a contact with a Loblaws in LaSalle that offers cooking classes geared towards teens,” says Binning. “We’ve never done it, just for budgetary reasons, but we do try to go on outings with the group, and every second Friday night we stay open until 10 p.m., just to offer more activities — less time on the streets. We’re always looking for new things to do.” ■

To volunteer or donate, contact Melissa Prioretti at the YMCA Pointe St-Charles at melissa.proietti@ymcaquebec.org