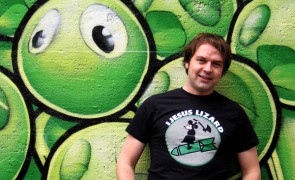 J. Joly has a vision. The Vancouver-based entrepreneur has taken leave from his digital marketing agency to start up an ambitious film production project, CineCoup, with the goal of nothing less than rethinking how movies are made and distributed in Canada.

Starting on Saturday, Dec. 1, anyone with a three-person crew, a two-minute trailer and a $150 application fee (“to keep the cat videos out,” says Joly) can apply to be a part of the process. To the victor go the spoils of a $1 million budget and a guaranteed cross-Canada release courtesy of big-dog distributor Cineplex.

Meeting with Cult on his cross-country promotional tour, the 40-year-old Joly (who looks a decade younger even with a Movember stache, with the energy to match) laid out his story. With a background including music (he played in 90s math-rockers Van Allen Belt) and the film business (“I spent almost 10 years in Toronto, working my way up from dragging cable through dog shit all the way up to reading scripts,” he says), Joly ended up in Vancouver, working with startups during the internet boom.

Eventually Joly started his own marketing agency, dimeRocker. Along the way, he recalls, “we learned how to connect with what I call the social generation, that I believe is being left out of most content creation in this country. Let’s just call it 18 to 35-year-olds. We take stake in content, evangelize, share and consume in a radically different way than any other generation before it. And a lot of the, let’s just call them linear guys, we’re leaking out of their funnel, their user funnel. They’re really good at capturing [ages] two to 12, and making movies for people over 35, [but] missing out on two generations. So a lot of my focus is, if they don’t want ’em, then I’ll cater to ’em. I’m just sayin’.”

In the Canadian film industry, Joly astutely points out, “lots of people like to point out the problems. ‘Oh, everything’s broken, nothing works.’ So we said ‘Well, wait a sec, let’s try to figure out the solution.’ Slowly, as we put our thinking and looked at the industry and what’s going on, we realized ‘holy shit, there’s a lot of opportunity here, and potential.’ So we’ve come up with a model; we believe that we can disrupt the way $1-1.5 million independent film is packaged, marketed and financed.”

Joly speaks in a motor-mouthed barrage of business and tech lingo. To quote but one example, he says his initial idea came when “I realized if I could create a robust back end, like a turnkey back end with the cloud and gamification, what we call trans-media bits, social voting — all these components to create really cool companion experiences, what are now being called second screen.” This is not your father’s film funding scheme, or even your older brother’s. The future is now.

CineCoup participants will be issued weekly challenges, and expected to help build up their audience support along the way through social media platforms. “We want to bring an entrepreneurial spirit to the filmmaker. We want them to get to focus on the audience first,” Joly says. “One of the most unsettling things I still hear is, I often ask young filmmakers ‘Whose job is it to market your film?’ Half the time, they say it’s the distributor’s job. Well, it’s actually your job, too.”

At the same time, he emphasizes “We’re not a contest. We’re actually just a very transparent studio model with the competition layer.” Referring to the traditional model of Canadian film funding, he points out that “everything has a competition layer — you just don’t see it ‘cause it’s in a black box, and you don’t know what kind of cronyism or influence might be going on.”

Joly proudly points out that the “coup” in CineCoup is short for “coup d’étât,” and he takes a mischievous pride in ruffling establishment feathers. “At heart I’m a bit of an enfant terrible, so I like a bit of us vs. them,” he admits. But fundamentally, he sees himself as an enabler for creative types, citing his main influences as Roger Corman and John Dunning and André Link, the tax-shelter era Montreal producers who launched David Cronenberg and Ivan Reitman’s careers. With a self-confidence that’s almost un-Canadian, he declares, “I’m hoping I give birth to that next golden era, by giving these guys and girls their start.” ■