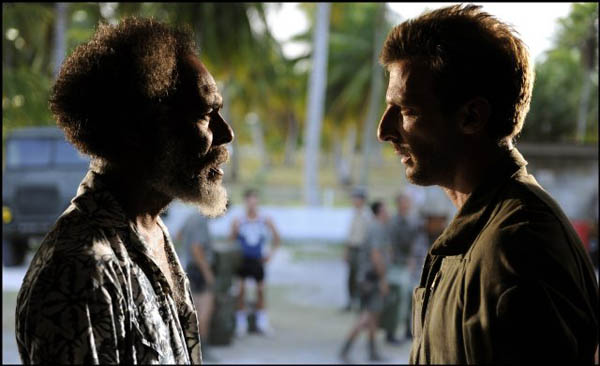 Mathieu Kassovitz returns from a decade of middling-to-bad directorial outings, splashing some of his patented righteous indignation all over this taut political thriller. Kassovitz seems to have learned some things in his ill-fated sojourn in Hollywood (where he was notoriously wrestled off Babylon AD, which was then recut into the most incomprehensible and slapdash studio blockbuster in recent memory), delivering a tight and slick thriller in the vein of Munich or Argo that focuses on a little-known slice of French history.

In the African French colony of New Caledonia, a band of militant rebels called Kanak overthrows a police station and holds several policemen hostage in order to fight for the colony’s independence. Special ops negotiator Legorjus (Kassovitz) is flown over with his team to smooth out tensions, only to find that the French government has already deployed a sizeable military force, and that his attempts at a peaceful resolution are being soundly ignored by the government, otherwise preoccupied with an election. The government leans towards a violent intervention in order to milk votes from the right-leaning populace, and Legorjus slowly loses his grip on the situation as he watches it escalate into a publicity-propelled bloodbath ordered by men he must obey.

Rebellion is classically mounted and impeccably shot, a minor epic that’s both personal and universal in its scope. Kassovitz uses the jungle setting beautifully, and the film is flawlessly paced despite the story itself being mostly about downtime. A bravura handheld long take towards the end seems poised to enter the pantheon alongside Children of Men and Touch of Evil, and Kassovitz’s assured performance anchors the film (despite the epic nature of the story, it’s pretty much all Kassovitz’s show).

The film was controversial when it was first released in France due to its rather militant politics: the story is in fact filled with venom towards the government and the way lives are sacrificed for political leverage. In a way, it’s hard to argue with the dissenters; while many aspects of the film are handled with tact (and most everyone will share Legorjus’ horror at the bungled situation), Kassovitz draws the government officials with a quasi-caricatured level of nefariousness. The various suit-and-tie men constantly standing in Legorjus’ way are one or two rewrites away from twirling their mustaches and tying ladies to train tracks. In a film that otherwise poses thorny questions with regards to morality, it’s hard not to see these cartoonish foils as a lazy path to audience manipulation.

Despite these narrative shortcuts, Rebellion is a powerful film from a director who showed so much promise with his debut La haine, that many thought he would never match it. While Rebellion isn’t quite the gut punch that film was, it’s nice to see that Kassovitz hasn’t lost it.

Are we witnessing the death of satire? Has the world become so ridiculous that it is impossible to tell the difference between reality and something that’s overblown for the purposes of critical evaluation? Five years ago, Xavier Giannoli’s Superstar would’ve been cutting, prescient satire; now it feels curiously possible and weirdly warmed-over. Everything about Superstar points to a great movie except for its muted satirical impact; in 2012, the idea of a man who becomes famous for no reason and is asked to use his fame to promote a strip club is not only possible, it’s happened twice this year in this province alone.

Martin Kazinski (Kad Merad) is a regular schlub who works in a computer-recycling plant. On his subway ride to work one day, strangers suddenly become obsessed with taking pictures of him, asking for his autograph and falling all over the place trying to get a look at this otherwise dopey-looking middle-aged man. He soon finds that the Internet is abuzz with pictures and videos of him going about his day, for no reason that he can understand; he has become the unwitting personification of the oft-quoted Warhol adage about everyone getting 15 minutes of fame. With the help of a TV producer (Cécile de France), he attempts to understand what’s happening to him while navigating the treacherous waters of celebrity.

The obvious model for Superstar is Network; it shares with Lumet’s stone-cold classic a wave of clueless TV execs, a depiction of the public as a uniform, faceless mass and a reasonable facsimile of Network’s third act (not mention that Superstar’s hapless-yet-venerated central character is extremely reminiscent of Being There). But where Network worked itself into a frenzy that still makes it palatable today, Superstar is significantly more grounded, and therefore significantly closer to what we witness every day. It’s well-observed and cutting, sure, but it plays it so close to reality that any additional commentary seems superfluous. Martin is the ultimate meme, instantly recognizable for his mere existence. The gap between him and the “pas l’temps d’niaiser” kid is minuscule.

Really, if there’s anything to be gleaned from Superstar, it might be that we’ve become so used to the idea of toxic fame that it bores us silly. Giannoli boils down the idea of fame to enough of an abstract that the film doesn’t become a repetitive slog (in fact, it has an almost science-fiction sheen), and Merad (who I only know from broad, shitty comedies as the French equivalent to Vince Vaughn) is a terrific Everyman. In fact, the entire film is solid, but it’s working towards an ultimately pointless goal. While the recent U.S. election strongly suggested that politics have superseded our current satire capabilities, Superstar seems to suggest that we cannot imagine fame more outlandishly than it currently exists. It’s a little depressing. ■