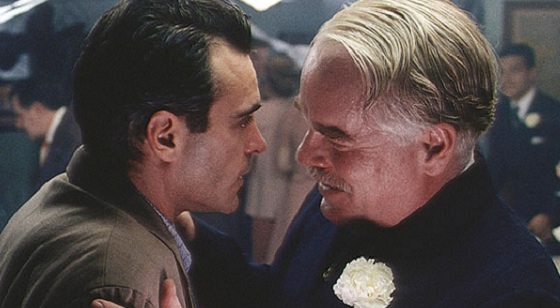 Paul Thomas Anderson’s The Master has ridden a wave of buzz creation that’s, well, masterful. From the intriguing trailer to the whisper campaign about the story’s links to the famously litigious Church of Scientology, it built up excitement like no other film in recent memory. Plus, Anderson has quite the resumé to live up to. So is it worthy of the hype? In this humble critic’s opinion, a qualified yes.

Joaquin Phoneix plays Freddy Quell, a troubled WWII veteran who has difficulty holding down a post-war job; there’s his propensity for violent outbursts, and then there’s his homemade alcohol that sends him, and whoever drinks with him, on decidedly unhealthy benders. After one of these, he wakes up on a ship, where Lancaster Dodd (Philip Seymour Hoffman) presides over his spiritual movement/cult, The Cause.

Dodd takes Freddy under his wing, much to the disapproval of Mrs. Dodd (Amy Adams, who more than holds her own among these intense thespians), and the rest of the movie is essentially the story of the men’s complicated relationship. Though the film is named after Hoffman’s character, Phoenix is really at its centre; like a lot of Anderson protagonists, he’s a man who can’t control his violent, antisocial impulses. And while Hoffman is great as usual, Phoenix is the film’s real revelation, a riveting and constantly unnerving presence onscreen.

What about the Scientology angle? There are definitely some parallels between Dodd and L. Ron Hubbard, and between their movements — in both cases a mix of therapy, brainwashing and mystical bullshit. But those expecting a devastating takedown of Scientology had best look elsewhere; there’s plenty in that department in real life, from Janet Reisman’s book Inside Scientology to Tony Ortega’s reporting in the Village Voice.

While The Master begins on a high note and sustains it for quite a while, some viewers may find themselves frustrated with where it goes. Without getting into spoilers, let’s just say there’s no climactic equivalent to Magnolia’s rain of frogs or There Will Be Blood’s murderous monologue. When it ends, you can admire Anderson for his commitment to artistic vision at the expense of conventional storytelling, but you also can’t help but be left wanting more. ■