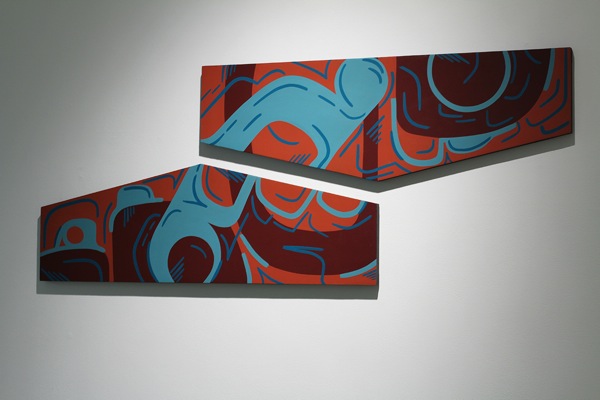 Interesting circumstances have brought interdisciplinary artist Sonny Assu to Montreal. Originally from British Columbia, the impossibly tall man with a boyish face that belies his actual age uprooted his entire life and moved to Montreal a little more than a year ago. “‘I met a French lady, fell in love and had a baby’ is how I put it,” Assu says, laughing about how he ended up in la belle province.

Melding First Nations iconography and the pop cultural zeitgeist of his childhood, Assu’s work aims to start a conversation about the historical treatment of First Nations people in Canada, as well as injecting a certain amount of humour, so people can more comfortably enter the conversation. His attention-grabbing artwork juxtaposes two different histories into pieces that work on both a conceptual and aesthetic level.

“It’s easiest for people to pigeonhole myself or other indigenous artists as First Nations or ‘other’ artists,” he says. These people, who presumedly mistake a cultural marker for the entirety of a person’s identity, are who Assu is trying to reach. Although he is Liǥwildaʼxw of the We Wai Kai First Nation, he is first and foremost a creator.

“When explaining my work, I like to make it clear that I am an artist first. I’m an artist who happens to be a First Nations person. If you always put that [First Nations] moniker in front of that title [of artist], people always assume my work is moccasins, teepees and dreamcatchers.”

Fortuitous events may have brought Assu to Montreal, but the promise of being able to help shape the cultural discourse here doesn’t hurt either. “The thing I find most exciting about being here is that I’m kind of entering this indigenous arts scene at a very ground floor level in Montreal,” he explains, noting the Quebec First Nations arts scene itself is an attractive proposition to him.

“I left Vancouver at a time when I had a career going, I had established my name, people knew the work I was doing. I really had no fear of people not knowing what I was doing. Being here, it’s a bit different because not a lot of people know who I am.

“Coming from B.C., that contemporary indigenous discourse has been going on for years. I have a chance to reach a new audience and re-educate, in a way. It proposes the question, ‘Why do we need to educate people?’ but then I do realize that there’s such a strong misunderstanding of who an indigenous person is in Canada.”

Assu continues, saying the discourse here in Quebec is different from his Vancouver surroundings. “The discourse that happens in B.C. is very much indigenous vs. colonizer, with reference to things like land claims, whereas here in Quebec it’s almost like English vs. French, who are both colonizers, and this whole discourse of the indigenous people is invisible here.” Assu is also interested in taking his own angle to Quebec-centric issues.

“I want to tackle the sovereignty issue. Not in terms of English vs. French, but I want to draw parallels between what francophones want and what my people want, and to what the Mohawk people want, because the Mohawks are invisible in this city, which is really shameful; they’re right here but they don’t participate, they don’t feel included because they’ve been systemically racialized their entire lives.”

Of concepts and execution
“My past and childhood are conceptual starting points. Now, I see these things like iPhones and iPods as socio-political commentary on how we’re able to go out and buy these things that are bringing us closer as humans. [With the iDrum series] I’m trying to point out that we’re all of the same clan, the iPhone clan. It can be the same for any technology. We all sit down and get on Facebook or other similar rituals in the same space.”

Not everyone is happy with the approach Assu takes to First Nations imagery, however. “There’s an issue of ‘sacredicity’ behind some of the [First Nations] iconography that certain people want to protect. I’ve caught some flak from elders in my community who have said what I was doing was wrong, but they say that from a standpoint of (cultural preservation); I come from an exact opposite way in that I need to strengthen these images in new ways. I understand where they’re coming from and don’t [begrudge] them for it either.

“I always say this in my artist talks: I’m not an angry Indian, I don’t want to come across as one. I don’t feel like I have a right to own that historical anger; I’ve never been sent to a residential school, though my grandmother was. When I start to talk about my work, like Billy And The Chiefs and The Happiest Future, these series have a strong political influence to them. I’m not angry, in your face, I’m more compassionate.”

Assu also stresses the notion that people shouldn’t be content to rely upon what they learn from traditional channels in order to inform themselves about issues. “In my own work there’s a strong element of self-education. What I was taught in high school about Native people is that ‘they were once here, now they’re gone. They used to make moccasins.’ I mean, residential schools existed well into the ’90s and First Nations people only gained the right to vote in the ’60s, which is not so long ago, and these are things I had to learn on my own,” he says. He also hopes to inspire others to seek out knowledge by creating pieces with strong personal as well as political elements to them.