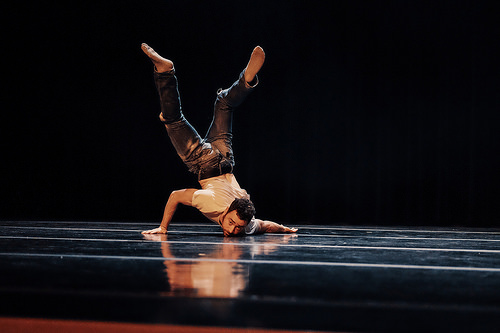 Some things about a post-’70s childhood will never change: Pop-Tarts, the Minipops, Popeye cigare — er, candy sticks. Well, maybe some things do change.

Come to think of it, an indie rock festival that makes room for the kids to let their hair loose and party is a pretty new idea. But, then again, without kid culture, there would be no pop culture.

Cult MTL parenting columnists and old pals Heather McCuen and Darcy MacDonald brought their respective six-and-a-half-year-olds to check out some of POP Montreal’s Kids Pop offerings, and reported back from the half-pint hipster scene.

Darcy MacDonald: My daughter Mélo has some pretty out-there fashion preferences. On any given weekend morning, I might find her moonlighting as Jessie the Cowgirl, or some kind of post-Joplin pop star princess.

She’s also bigtime into drawing, bricolage and increasingly abstract shape design, which I noticed lately when she Pollocked up a bunch of paper towel with nail polishes and tore strands through the canvas.

So the Monster Team T-Shirt workshop held Saturday at Pop House was a perfect mix of her interests. Explaining to her en route that local artists had contributed vinyl cut-outs in various frightening forms resulted in a barrage of questions.

However, when she saw that they worked as elaborate “stamps” with coloured, non-toxic, oil-based fabric paint, she quickly assembled her favourite pieces and Frankensteined up that bright yellow Winners tank with her own ghoulie goon — a bird-like creature wearing a menacing Hansel-n-Gretel-ish bodice! No doubt it will find a place of honour in her Saturday morning wardrobe selection.

DM: You could barely walk a foot at Sunday’s Kids Pop Don’t Stop without stepping on a kid or a crayon — often at the same activity, and luckily (at least as far as I noticed) not joined at the nostril.

Arts and crafts play a huge role in all the Kids Pop programming, especially this shindig. The decoration of an elaborate banner was underway on one side of the floor, and a computer animation workshop briefly caught her eye, but Mélo went straight for the puppet-making section of an L-shaped, dreamlab experiment table.

I made sure to snag us a coupla copies of the first-ever homegrown Kids Pop colouring book. Meanwhile, Mélo and one of many gentle, friendly volunteers gathered the materials to make a punch-hole cardboard doll with moving limbs. I opted to make a dangly string-legged avatar of myself out of an old toilet paper roll in an effort to teach my kid about self-confidence.

Heather McCuen: If there’s such a thing as a man’s man, then my son Luca is a boy’s boy. Superheroes, ninjas and race cars consume the bulk of his imagination. So I was curious to see what part of Kids Pop would grab his attention. As we walked in, I watched him survey the crowded room for the “awesomeness” that I had promised him that morning. He grabbed one of the free juice boxes and looked around. Drawing on the floor? No. Arts and crafts? Not a chance, Mommy.

And then he saw it: a giant series of tents in which to evade parental supervision. It’s a beautiful moment, when boy meets tent. His eyes lit up, and he turned to me in disbelief. Am I allowed? Do you promise? Before I could say yes, I was holding an empty juice box and he was gone. Kudos to artist Alexis O’Hara for knowing that kid heaven looks a lot like a tent.

DM: My daughter’s affinity for breakdancing has nothing to do with me, I swear. Okay, that’s a fib. I can’t help that children are hyper, prone to sudden physical outbursts, love music and are curious to know what makes a person able to spin on his or her head.

Mélo, not too long ago, had complete access to a professional-grade, sponsored outdoor break mat, and I gotta say, the rule of monkey see, monkey do proved itself true as she imitated the body rockin’ she had earlier witnessed by the pros. But a little structure was in order.

Luckily, Kids Pop saw us coming, and a half-hour session with local kid-whispering breaker Krypto showed the children the fundamentals of the circle, the arm stretch, the b-stance, “attitude” and hittin’ the floor for some air kicks. My kid — the biggest girl in a circle of ridiculously cute b-tots — told me after she felt she had really stepped her handspin game up, so it’s off to find some more regular lessons.

Her professional colleague Luca was way more into Mommy’s camera functions as we sat and watched, eventually wandering back off to his beloved tent.

Then, to Mélo’s jubilation, the temp tat artists she had been haranguing me about non-stop for three days reappeared, presumably from some sort of extended break… ahem.

HM: When Luca finally emerged from his rope-and-blanket kingdom, he noticed Mélo over at the temporary tattoo table. Her sleeves were rolled up, and one of the young artists was halfway through her first selection — a classic heart-and-unicorn combo. Her second choice, the perfect companion for her unicorn, was a menacing yet adorable white skull and crossbones.

Luca looked a little concerned that someone might accidentally draw a unicorn on him, but selected a snake for one arm and a lightning bolt for the other. When they were finished, both he and Mélo proudly displayed their tats for all to admire.

As we were leaving, Luca smiled up at me and yawned. “You know, I’m braver than you, Mommy. My tattoos didn’t hurt at all!” My precious little monkey, all inked up and ready for a nap. Priceless.

Kids Pop is totally fun, free, community-oriented affair that drew as many smiles from the children as their moms and dads in a relatively meltdown-free, stimulating environment with enough to go around for everyone. And best of all, for parents fed up of “the ask” — no merch table! ■