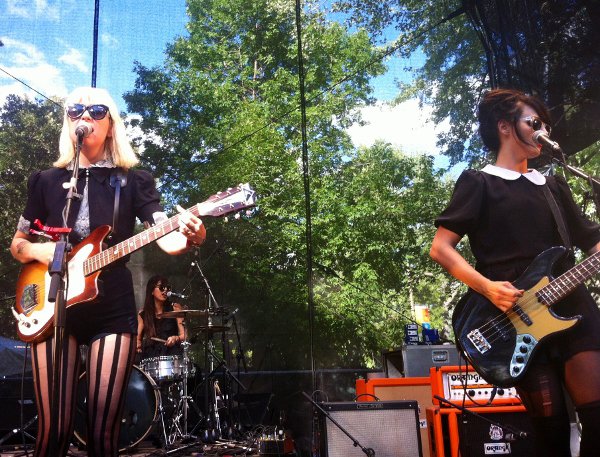 Filthy, wet, calloused, tattered and lightly battered, Cult MTL is back from the field. And what a fucking field.

Osheaga grew another limb this year, expanding as far as it could on Montreal’s baby sister island, Ile Ste-Hélène. Next year, we might be riding La Ronde’s Monster right into this bitch, armed with glow sticks, rum and cokes and barf bags courtesy of Air France.

But for now, here’s us raving about our nine favourite shows at Osheaga:


The Jesus and Mary Chain
This band inspires huge love. But how exciting could their reunion show really be? Well, it was mammoth. The Reid brothers (with the old bassist from Lush) aren’t exactly thrilling to watch, even though Jim has aged okay — Will hasn’t, but whatever. Their songs and their sound simply stand alone. We got the classics, from “Head On,” “Far Gone and Out” and the epic Stooges-ripping closer “Reverence,” the best, most distorted dance tune about death wishes ever. But what sealed it for me was hearing two sentimental favourites, “Just Like Honey” and “Sometimes Always” (the latter originally a duet with Mazzy Star’s Hope Sandoval) sung with assistance from Montrealer and Mad Men starlet Jessica Paré. WTF?! Yes. Bring it, Megan.

Dum Dum Girls
Girls, guitars, cool tunes, even cooler outfits — I’m a sucker for this stuff. With a new bassist in tow (remember Heroin Red from last winter’s show at Il Motore?), they soldiered through a scorching afternoon set in hot black threads, drawing on their training under the California sun. Their set started late and was cut short due to technical snafus, but in their brief time on the Tree Stage, they let loose some deluxe pop melodies and bulging guitar grit, injecting a little dark and dangerous garage rock energy into the balmy atmosphere.

The Black Angels
What can I say? I loved the Weeknd, Santigold and Austra, but I could not get enough guttural guitar blast in my face at this festival. This Austin band, with the bonus of Elephant Stone/ex-High Dials guy Rishi Dhir on bass and sitar, first blew me away with their debut album Passover in 2006, combining the Velvet Underground’s low-down drone and the girthy punch of early Sabbath with swirling psychedelic black magic. Feeling the band, and that early material in particular, in the soggy trenches of the Tree Stage on Sunday, surrounded by muddy dancers and strange vibrations, felt like participating in a pagan ritual.


Woodkid
The diminutive Frenchman performed his cataclysmic, low-end heavy set at the height of Sunday’s torrential downpour. Flanked by two live percussionists, an electronic drum player, a keyboardist and a horn section, Woodkid’s Gallic druid pop perfectly suits the end times, and for a brief moment during “Iron,” they seemed to be fast approaching.

SBTRKT
All everyone wanted to do was dance, but it was hard to keep your eyes averted from what was happening on stage. The producer himself (wearing a hoodie instead of his famed tribal mask) alternated between live drums and a table full of electronic gizmos (and a theremin!) while the vocalist also played his fair share of instrumentation. Both bounced between their various duties at superhuman speeds, and the music felt very organic as a result, including their manic deconstruction of Drake’s verse on “Wildfire.”

Passion Pit
The Boston group had already cancelled most their summer concert dates (an article in Pitchfork on frontman Michael Angelakos’s mental health may explain why), so that they showed up at all was a delightful surprise. Their current hits were as bubbly and frantic as on the record, while they also dug into their back catalogue with a spirited performance of “Better Things.”


A$AP Rocky
Cross-eyed by the term “purple swag”? You couldn’t be nearly as dumbfounded as the crowd that converged on Harlem’s liveliest young one in the long, hot summer heat of Osheaga’s Saturday afternoon.

This audience was not immediately sure how to receive what they were seeing — that is, East Coast trill. The kids just know Rocky is aiiight, and they don’t even think about why, much less about genres or ideals.

Rocky drew thousands deep but couldn’t find kush to save his life when he flat-out asked for some tokes from somebody, anybody, everybody… No?

Once the crowd surfing started, dude had it in the palm, which is no surprise at all. A$AP delivers on time. You gotta figure if your parents name you Rakim, after the God MC, some shit must make sense in the world after all.

Common
When Chicago’s one-man rap carnival comes through town, you get an intimate, intricate club show that you never forget.

But what’s unforgettably beautiful is when double-digit thousands crew up under a broadly breaking clear sky to embrace a musical legend whose catalogue of underground classics and certified global hits is unparalleled in hip hop or much else. This is the guy whose first collaborator and producer, pretty much a hermit named No I.D., fostered no less a talent than Kanye West (hint, Osheaga) through his mentorship.

If you saw the show and wondered why you never heard this guy on your car radio, don’t get mad, bro — get Common. With Santigold as the aftershock, this festival does better and better by party people each year.

The all-seeing eyes of the Internet and Jah shall be and always shall remain as Babylon unto Zion.

The thunder, water and winds of righteous, redemptive air cleansing only hit the fest on Sunday evening, but the mighty hand of the all-eternal swooped down and slapped Snoop upside our heads to close out the main stage on Saturday, capturing a moment in time so precisely rock ’n’ roll that anyone bitching about the Dee-Oh-Double’s newfound Rasta persona should really breathe, and preferably a lungful.

To close out his set, Snoop invoked two more names I can hardly stand — Khalifa and Mars.
But if that, too, sounds Snoop Crazy, then maybe so does the actual concept of being “young, wild and free,” as the anthem embraces. If so, you need to get more lifted, even if it takes a 40-something weedhead rapper to take you there. ■